Blast from the Past - Milwaukee Journal article highlights Wenig's entrance into Funeral Service. 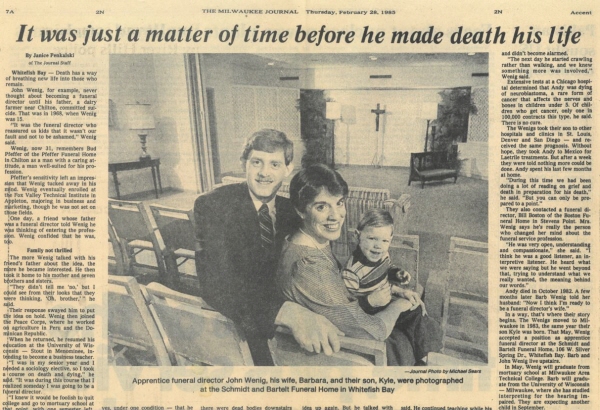 This article appeared in the Milwaukee Journal on February 28, 1985, and highlights John and Barb Wenig's story into funeral service. Since this day, they have faithfully served thousands of families during their most difficult days.

It was just a matter of time before he made death his life.

Whitefish Bay – Death has a way of breathing new life into those who remain.

John Wenig, for example, never thought about becoming a funeral director until his father, a dairy farmer near Chilton, committed suicide.  That was in 1968, when Wenig was 15. “It was the funeral director who reassured us, kids, that it wasn’t our fault and not to be ashamed, “ Wenig said.

Wenig, now 31, remembers Bud Pfeffer of the Pfeffer Funeral Home in Chilton as a man with a caring attitude, a man well-suited for his profession. Pfeffer’s sensitivity left an impression that Wenig tucked away in his mind.  Wenig eventually enrolled at the Fox Valley Technical Institute in Appleton, majoring in business and marketing, though he was not set on those fields.

One day, a friend whose father was a funeral director told Wenig he was thinking of entering the profession.  Wenig confided that he was, too.

The more Wenig talked with his friend’s father about the idea, the more he became interested. He then took it home to his mother and seven brothers and sisters.

The more Wenig talked with his friend’s father about the idea, the more he became interested.  He then took it home to his mother and seven brothers and sisters.

“They didn’t tell me “no”, but I could see from their looks that they were thinking, “Oh brother,” he said.

Their response swayed him to put the idea on hold.  Wenig then joined the Peace Corps, where he worked on agriculture in Peru and the Dominican Republic.

“I was in my senior year and I needed a sociology elective, so I took a course on death and dying,” he said.  “It was during this course that I realized someday I was going to be a funeral director.”

A deal with fiancée

Meanwhile, he had met Barbara.  He wanted to get married.  She said yes, under one condition – that he not become a funeral director.

She had a hard time picturing herself living in a funeral home, like many funeral directors do, Wenig said.

“She had a hard time realizing how she could lead a happy, contented life upstairs while knowing that there were dead bodies downstairs and people grieving on the first floor.”

Wenig promised he would not become a funeral director without her approval.

After they were married and he had taught at a Stevens Point high school for a while, he brought the idea up again.  But he talked with several funeral directors who told him it was very important that the entire family understand the nature of the funeral service, its demands and irregular schedule.

“I know I didn’t have Barb’s support, so I decided that I could still do something else and be happy,” Wenig said.  He continued teaching while his wife worked as a teacher’s aide.

They have a son

In December 1980, Andy, their first son, was born.  Not quite two years later, in July 1982, the Wenig’s noticed Andy was limping.  At first, they thought he had bruised himself and didn’t become alarmed.

“The next day he started crawling rather than walking, and we knew something more was involved,” Wenig said.

Extensive tests at a Chicago hospital determined that Andy was dying of neuroblastoma, a rare form of cancer that affects the nerves and bones in children under 5.  Of children who get cancer, only one in 100,000 contracts this type, he said.  There is no cure.

The Wenigs took their son to other hospitals and clinics in St. Louis, Denver and San Diego – and received the same prognosis.  Without hope, they took Andy to Mexico for Laetrille treatments.  But after a week they were told nothing more could be done.  Andy spent his last few months at home.

“During this time, we had been doing a lot of reading on grief and death in preparation for his death,” he said.  “But you can only be prepared to a point.”

They also contacted a funeral director, Bill Boston of the Boston Funeral Home in Stevens Point.  Mrs. Wenig says he’s really the person who changed her mind about the funeral services profession.

“He was very open, understanding and compassionate,” she said.  “I think he was a good listener, an interpretive listener.  He heard what we were saying but he went beyond that, trying to understand what we really wanted, the meaning behind our words,”

In a way, that’s where their story begins.  The Wenig’s moved to Milwaukee in 1983, the same year their son Kyle was born.  That May, Wenig accepted a position as apprentice funeral director at the Schmidt and Bartelt Funeral Home, 106 W. Silver Spring Dr., Whitefish Bay.  Barb and John Wenig live upstairs.

In May, Wenig will graduate from mortuary school at Milwaukee Area Technical College.  Barb will graduate from the University of Wisconsin – Milwaukee, where she has studied interpreting for hearing impaired.  They are expecting another child in September.

Wenig says he has a special interest in working with bereaved parents.  Barb said she also would be available if the mother of a deceased child wanted to talk.