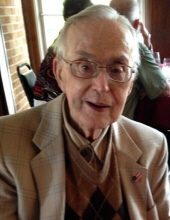 A. Edwin Vinson, 93, of Sheboygan Falls, passed peacefully into the presence of his Lord and Savior on Thursday afternoon, February 8, 2018, at Pine Haven Residential Home.Ed was born on February 17, 1924, in Toledo, Ohio, son of James S. and Hazel (Kuehnle) Vinson. He was a 1942 graduate of Toledo Woodward High School. Ed served in the US Air Force during World War II as a bombardier in the 38th Bomb Group. On September 20, 1946, he married Ruth J. Kramer in Sheboygan. Ed started his career in Sheboygan in the hardware department at Prange-Geisenheimer Hardware. In 1951, he was the top salesperson of Delta Tools in Wisconsin. During that year, he changed careers to become a Life Underwriter for Metropolitan Life Insurance. He later served as the President of the Life Underwriters Association in Sheboygan. He retired in 1981, after 29 years of service with Metropolitan. In retirement, he worked in cabinet making and remodeling, turning his long-time hobby into a small part-time business. He also enjoyed the "hunt" for antique hand tools and woodworking planes. He was an active member of the Midwest Tool Collectors for many years.In 1949, Ed joined the Evangelical Free Church in Sheboygan, where he served as a Sunday school teacher, Trustee, Chairman of the Executive Board, member of the Building Committee and many other areas of service. He developed a program for the Youth called, Teens ‘N Topics, where he helped the teens develop confidence in public speaking skills. He tirelessly worked with fellow members to remodel the church facility on south 9th street, the parsonage on south 10th street, the Christian Education Building Addition, and the subsequent remodeling a vacant Red Owl Store into the current facility. His children, grandchildren, family members and friends remember Ed's generous giving spirit, in so many ways. He devoted countless hours to helping each of us with any project, large or small. He was happy to have developed a strong relationship with his two son-in-laws, and his daughter-in-law through working together. He took delight in finding and gifting tools to his children, grandchildren and great-grandchildren. He was known for meticulous calligraphy to personalize greeting cards, letter Bible verses as gifts, and most recently, to recognize the birthdays of some of his friends at Pine Haven. He was also known for his interesting, detailed story-telling, including tales of Grandpa Kuehnle, Montana, the Air Force, and working on projects. Ed was the devoted father of two daughters, Sharyn (Al) Whitman of Hanover, IN and Lori (Gary) Lindau of Waterville, OH; and son, Dale (Brenda) Vinson of Sheboygan Falls; cherished grandfather of six grandchildren, Jason (Ondee) Whitman, Alia (Craig) Schellenberg, Jonathan (Orianna) Lindau, Peter Lindau, Joshua (Lauren) Vinson, and Zachery (Christina) Vinson; eleven great-grandchildren; one sister-in-law Mildred "Midge" Vinson; one brother-in-law, Donald (Peggy)Kramer of Minneapolis, and many nieces and nephews.Ed was devoted to his wife Ruth who preceded him in death as well as his parents; one son, Ronald Vinson; one brother, John K. (Dorothy) Vinson, two sisters, Mary (Dell) Woon and Nancy (Larry) Pawlaczyk. A service to celebrate Ed's life will take place at 6 pm on Tuesday, February 13, 2018, at the Evangelical Free Church, 1710 N. 15th Street, Sheboygan, WI 53081, with the Rev. Dr. Gary Hylander and Rev. Jon MacDonald officiating. A private burial with military honors will take place at Wildwood Cemetery. Relatives and friends may greet the family at the church on Tuesday from 3:00-6:00 pm, with the service immediately following at 6:00pm. A memorial fund has been established in Ed's name for Sheboygan County Campus Life, P.O. Box 83, Sheboygan, WI 53082-0083, or Sheboygan Evangelical Free Church, 1710 N. 15th Street, Sheboygan, WI 53081.The Vinson family would like to extend their heartfelt appreciation to the staff at Pine Haven Residential Home, and the Sharon S. Richardson Community Hospice for the loving and dedicated care given to Ed and their family.The staff of the Wenig Funeral Home of Sheboygan Falls (920-467-3431) is assisting Ed's family with arrangements.

To order memorial trees or send flowers to the family in memory of A. Vinson, please visit our flower store.