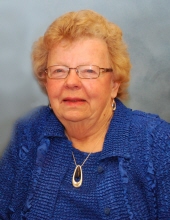 Audrey Jean Mulder, 87, of Sheboygan Falls died on Sunday morning, February 25, 2018 at Pine Haven Covenant Home in Sheboygan Falls.Audrey was born on January 18, 1931 in the Town of Lima, the daughter of the late Jacob and Florence (Daane) Buehler. Audrey graduated from Sheboygan Falls High School in 1949 and married Kenneth W. "Lefty" Mulder on September 2, 1950. He preceded her in death on January 11, 2017. Audrey, together with her husband, owned and operated a dairy farm in the Town of Lima for many years. Audrey worked for the Sheboygan County Extension Office for a brief time.Audrey was a lifelong member of the First Reformed Church in Sheboygan Falls where she was a member of the Dorcas Sewing Circle, Ambassador Sunday School Class and various Bible Studies. She was a General Leader of the Dye Road 4-H Club, Homemaker Club, and enjoyed volunteering at the Discipleship Focus in Branson for several years. Audrey was a faithful supporter at her family's sporting, church and school events.Audrey is survived by three daughters, Jean Scroggins of Sheboygan Falls, Joan (Dale) Hoffmann of the Town of Lima, and Jane (Dan) Van Wyk of Sheboygan Falls; one son, Jim (Cyndi) Mulder of the Town of Lima; ten grandchildren, Joshua (Bobbie) Stroessner, Joy (Josh) Heinen, Audra (friend Seth Van Gheem) Hoffmann, Megan (TJ) Baggett, Erica (Mike) Sommerfield, Brian (Jenn) Van Wyk, Jamie (Zach) Delk, Scott (Heather) Mulder, Timothy Mulder, Kari (Joe) Below; 18 great grandchildren, Ava, Arthur and Wesley Stroessner, Blane, Brody and Baxter Heinen, James, Andi and Gavin Delk, Jaxon and Maddox Mulder, Brayden Kraemer, Noah Van Gheem, Theodore and Miles Sommerfield, Emmaline, Hailey and Penelope Van Wyk; one sister, Marlys (Gene) Samse of Cedarburg; one sister-in-law, Barb Buehler of Merrill; and one brother-in-law, Norman (Marge) Mulder of the Town of Lima. Audrey is also survived by nieces and nephews.Audrey was preceded in death by her husband, Kenneth "Lefty"; a grandson, Thomas Van Wyk; a brother, David Buehler; her parents, Jacob and Florence Buehler; and parents-in-law, Clarence and Susie Mulder. A funeral to celebrate Audrey's life will take place at the First Reformed Church in Sheboygan Falls on Thursday, March 1, 2018 at 11 am with the Rev Brad Veenendaal officiating. Burial will take place at the Sheboygan Falls Cemetery.Friends may greet the family at the Wenig Funeral Home in Sheboygan Falls on Wednesday from 5-7 pm; and at church on Thursday from 10 am until the time of the service at 11 am.A memorial fund is being established in her memory for the Hospice Angels Foundation.The Mulder Family would like to express their appreciation to the staffs of Pine Haven Covenant Home and Compassus Hospice for the loving and dedicated care given to Audrey and their family.For online condolences and additional information please visit www.wenigfh.com The Wenig Funeral Home in Sheboygan Falls (920-467-3431) is assisting the Mulder family.

To order memorial trees or send flowers to the family in memory of Audrey Mulder, please visit our flower store.