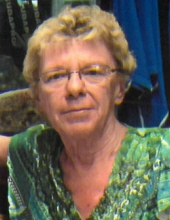 Barbara J. (Schmidt-Cox) Gutche, 71, of Sheboygan Falls, passed away on Monday, July 29, 2019, at her home.Barbara was born on October 2, 1947, in Marshfield, daughter of Frederick and Dorothy (Nikolai) Schmidt.  She was a 1965 graduate of Marshfield Senior High.  On August 28, 1992, she married Phillip C. Gutche in Sheboygan.  Phillip preceded her in death on June 1, 2007.  Barbara was employed as a department manager for Bemis Mfg. for over 40 years until her retirement.Barbara was a member of St. Paul Lutheran Church in Sheboygan Falls where she was active in the Altar Guild, the funeral luncheon ministry, and the Gathering Place. She was a member of the Red Hat Society, card club, and Packer Club and the Board of Directors at Meadowland Credit Union.  Barbara enjoyed spending time with her fishing crew at Shawano Lake and Mole Lake. She felt fortunate to have traveled all over the world; including various parts of the United States, Israel, Guam, Paris, and Jamaica.  Barbara recently saw Cher in concert with her daughter, Jody. She also enjoyed watching her great-grandson, Conner, play in a baseball tournament last weekend. Other favorite past times include caring for her lovely flower garden, doing jigsaw puzzles on her iPad, cheering on the Green Bay Packers and Milwaukee Brewers, and chasing after her two great-grandsons.Barbara is survived by her daughter, Jody (Dean) Sohn of Sheboygan Falls; two grandchildren, Joshua (Amber) Sohn and Rebecca Sohn; two great-grandsons, Conner and Decklan; five sisters, Betty Fellenz, Bonnie Scheibe, Kathy Scheibe, Debbie (Paul) Boushack, and Renee (Doug) Anding; and one brother, Tom (Sally) Schmidt; two stepdaughters; and many nieces and nephews, who all loved her spunkiness.Barbara was preceded in death by her husband, parents, three sisters, Jeannie (Charlie) Watts, Gerri (John) Koran, and Judy (Myron) Brown; and a brother, Richard Schmidt.A funeral service to celebrate Barbara's life will be held at 2:00 pm on Saturday, August 3, 2019, at St. Paul Lutheran Church in Sheboygan Falls with Rev. Kyle Backhaus officiating.  Relatives and friends may gather at the church from noon until the time of the service at 2:00 pm. Barbara brightened our world, to honor her, we ask everyone in attendance to wear colorful attire. For online condolences and additional information please visit www.wenigfh.com The staff of the Wenig Funeral Home of Sheboygan Falls (920-467-3431) is assisting Barbara's family with arrangements.

To order memorial trees or send flowers to the family in memory of Barbara Gutche, please visit our flower store.