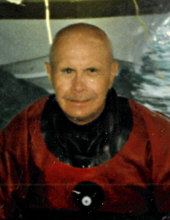 Wilbur C. Knopp, 90, of Kohler, passed away on Thursday, July 4, 2019, at Pine Haven Christian Home- Giddings Avenue.Bill was born on May 17, 1929, in Sheboygan, to Emil and Estelle (Walters) Knopp. He was a graduate of Kohler High School, and later served his country in the U.S. Armed Forces from 1949 until 1951.Bill was employed at Kohler Company, Polarware, and owned and operated a tree trimming business for many years. Bill was a dedicated SCUBA diver, diving on any shipwreck he could get to and was a member and representative for local diving clubs and had a special appreciation for his boats and "diving buddys". He was a member of Bethany Lutheran Church of Kohler and enjoyed hunting, fishing, and spending time with his family and friends. Bill is survived by special cousins, Shirley Mueller, and Tammy (Jeff) Klaisner (children, Molly, Jake, and Abby); and special friends, David Rische, and families of Nicole (Robert) Dragan and Michele (Tony) Cyr. He is further survived by other dear relatives and friends. Bill was preceded in death by his parents, Estelle & Emil Knopp; brother, Harry Knopp; and his former wives, Betty Knopp, and Doris Knopp. A funeral service to celebrate Bill's life will be held on Wednesday, July 10, 2019, at 11:30 am at the Wenig Funeral Home in Sheboygan Falls with Rev. Robert Steele of Bethany Lutheran Church officiating. Visitation will take place at the funeral home from 10 am until the time of service at 11:30 am. Burial will take place at Woodland Cemetery in Kohler.Memorial contributions can be made in his name. For online condolences and additional information please visit www.wenigfh.com. The Wenig Funeral Home of Sheboygan Falls, at 711 Broadway Street, (920-467-3431) is serving Bill's family with arrangements.

To order memorial trees or send flowers to the family in memory of Bill Knopp, please visit our flower store.