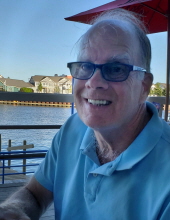 Clark David Legener, Sr., 70, of Oostburg, passed away unexpectedly at home on Tuesday, November 26, 2019.Clark was born on January 15, 1949, in Green Bay, WI to Rodney and Anastasia (Baumgart) Legener. He was a graduate of Riverside High School. On June 17, 1989, Clark married Suzan Radtke in Milwaukee. Clark was employed at Southern Preservation as an Operations Manager until his retirement in 2008. He was a patient and devoted husband. He always knew he was loved and always made sure others knew he loved them in return. He was life-long fan of the Green Bay Packers and enjoyed attending games with his family. He was a proud member of "The Legends of Riverdale". He enjoyed golfing and mowing the greens at Sunset Hills. Other interests include sheepshead and caring for his many pets. He greatly cherished the relationships he had with family and friends. Clark is survived by his wife, Suzan; son, Clark Legener, Jr.; daughter, Michelle Legener; two step-sons, John (Amanda) Hayes III and Sonny Hayes; brother, Craig (Lindy) Legener; and sister, Cheryl (Robert) Braasch. He is further survived by various grandchildren, nieces, nephews, and in-laws. Clark was preceded in death by his parents, Rodney and Anastasia. Relatives and friends may greet the family at Wenig Funeral Homes - Oostburg on Saturday, November 30, 2019 from 11:00 am to 1:00 pm. A memorial fund is being established in his name.For online condolences and additional information please visit www.wenigfh.com. The Wenig Funeral Home of Oostburg (920-564-2771) is serving the Legener family with arrangements.

To order memorial trees or send flowers to the family in memory of Clark Legener, please visit our flower store.