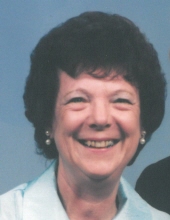 Corrine Catherine "Corky" Kampmann, 84, of Sheboygan Falls, passed away on Friday, May 25, 2018, at her home. Corrine was born on August 6, 1933, in Plymouth, to Walter and Martha (Siebers) Warner. She was a 1951 graduate of Plymouth High School. On April 30, 1955, Corrine married Robert Kampmann in Plymouth. Robert preceded her in death on March 13, 2006. She was a member of Blessed Trinity Parish in Sheboygan Falls where she served on the Ladies Aide-Luncheon group and Christian Mothers group. She enjoyed playing cards, bowling, rummage, and taking bus trips.  Corrine is survived by her three daughters, Faye (Mark) Oppeneer of Sheboygan Falls, Lori (Tom Malueg) O'Keefe of Oostburg, and Joni (Paul) Werner of Sheboygan; two sons, John Kampmann, and Gary Kampmann, both of Sheboygan Falls; nine grandchildren, and four great-grandchildren.  Corrine was preceded in death by her loving husband, Robert; parents, Walter and Martha Warner; sister, Mary Pitzen; and two brothers, Walter Warner, Jr., and Dudley Warner. A Mass of Christian Burial to celebrate Corrine's life will be held at Blessed Trinity Parish in Sheboygan Falls on Friday, June 1, 2018, at 4 PM. A burial will take place at St. Mary Catholic Cemetery in Sheboygan Falls. Relatives and friends may greet the family at the church on Friday from 2 pm until the time of Mass at 4 pm.  A memorial fund is being established in her name. For online condolences and additional information please visit www.wenigfh.com. The Wenig Funeral Home of Sheboygan Falls (920-467-3431) is serving the Kampmann family with arrangements.

To order memorial trees or send flowers to the family in memory of Corrine Kampmann, please visit our flower store.