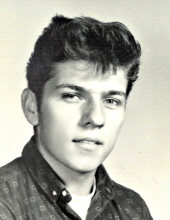 Daniel Alfred DePagter, 74, of Sheboygan, passed away on Saturday, August 24, 2019, at Sharon S. Richardson Community Hospice. Dan "Screech" was born on May 19, 1945, in Sheboygan, WI, to Harvey and Gertrude (Buchholz) DePagter. He was a 1963 graduate of Oostburg High School and served his country in the U.S. Army from 1963 until 1969. Dan worked in the concrete business for over 40 years or as he would say "more years of experience than I care to admit", working for many years at Stecker Construction and later owning and operating his own business, Dan's Concrete. Dan enjoyed his work and occupied his time with work related activities over his life. He never stopped trying to build a better mouse trap. He was a hard worker and dedicated to helping others in many ways. Dan is survived by his two sons, Rob (Maria) Baer of Cleveland, WI, Tony DePagter of Hong Kong; two grandsons, Nicholas Baer, Noah Baer; and two brothers, Gerald (Janis) DePagter of Sheboygan, Richard DePagter of Bradenton, FL; and his faithful companion, his dog C.J. Daniel was preceded in death by his wife, Carol Jean DePagter; parents, Harvey (Gertrude) DePagter; sister, Elaine (John) Hubing; two brothers, Edward DePagter, Norbert DePagter; and a sister-in-law, Maria DePagter.A funeral service to celebrate Dan's life will be held on Friday, August 30, 2019 at 12:00 pm at the Wenig Funeral Home of Oostburg. Burial will take place at Oostburg Cemetery.Relatives and friends may greet the family at the funeral home on Friday from 10:00 am until the time of service at 12:00 pm. Memorial contributions can be made in his name. A special thanks for Dr. Mark Bettag and the staff of Matthews Oncology and the staff of Sharon S. Richardson Community Hospice for their kind and compassionate care. For online condolences and additional information please visit www.wenigfh.com. The Wenig Funeral Home of Oostburg (920-564-2771) is serving the DePagter family with arrangements.

To order memorial trees or send flowers to the family in memory of Daniel DePagter, please visit our flower store.