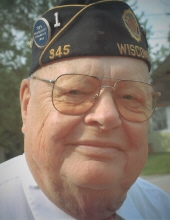 David James Dolfin, 94, of Hingham, passed peacefully into the presence of the Lord on Sunday, February 25, 2018, at Pine Haven Christian Home in Oostburg.David was born on September 29, 1923, in Falmouth, MI to Rev. Cornelius and Rena (Weemhof) Dolfin. He was a 1941 graduate of Oostburg High School. David served his country in the United States Army Air Corps from 1942 until 1945.When David was eight years old, he kissed a lovely young girl under his kitchen table. On February 28, 1946, that lovely young girl became David's bride when David married Audrey L. Kappers in Hingham. From 1946 to 1960, David managed and owned the Hingham Grocery Store. He then started Whitewater Outdoors which he owned and operated with his family for over 28 years. David was a faithful member of Hingham Reformed Church where he served as an Elder, Deacon, Sunday School Superintendent, Sunday School and Bible Class Teacher. He was also a faithful member of the American Legion Post 345 for over 70 years. He enjoyed traveling, playing baseball, and watching sports. He enjoyed his winters in Florida and summers at their cottage in Northern Wisconsin for over twenty years. David is survived by his loving wife of 72 years, Audrey Lenore Dolfin; two daughters, Ruth (Kenneth) Kanz of Hingham, Margery (Ralph) Warkentin of Linn Grove, IA; three sons, James (Ann) Dolfin of Oostburg, Joel (Emily) Dolfin of Hingham, Todd (Laura) Dolfin of Hingham; 14 grandchildren, 37 great grandchildren; a sister-in-law, Kathryn Rauwerdink; and a brother-in-law, Larry (Jean) Kappers. He is further survived by nieces, nephews, other relatives, and friends. David was preceded in death by his parents, Cornelius and Rena Dolfin; two brothers, Fred (Viola) Dolfin, Paul (Joyce) Dolfin; two brothers-in-law, Warren Rauwerdink, Harold (Miriam) Kappers; and a sister-in-law, Mary (Lauren) DeTroye.A funeral service to celebrate David's life will be held at the Hingham Reformed Church on Tuesday, February 27, 2018, at 6 pm with Rev. Steve Bakker officiating followed by military honors. A family burial will take place on Wednesday at Hingham Cemetery.Relatives and friends may greet the family for a time of visitation at Hingham Reformed Church in Hingham on Tuesday, February 27, 2018 from 3 pm until the time of service at 6 pm.A memorial fund is being established in his name for the flag fund at Hingham Legion Post 345. The family would like to extend their thanks to the staffs of Pine Haven Christian Homes, Sharron S. Richardson Community Hospice, and the Vince Lombardi Cancer Clinic for their kind and compassionate care.For online condolences and additional information please visit www.wenigfh.com. The Wenig Funeral Home of Oostburg (920-564-2771) is serving the Dolfin family with arrangements.

To order memorial trees or send flowers to the family in memory of David Dolfin, please visit our flower store.