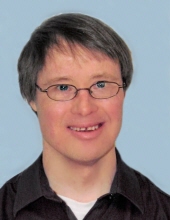 David Harmeling Jr., age 54, of Hingham, passed into the arms of Jesus, his beloved Savior, Saturday, March 9, 2019 at Sunny Ridge Rehabilitation Center.Born on April 26, 1964, in Sheboygan, Wisconsin, the son of David and Ruth (Tenpas) Harmeling. David was a 1985 graduate of Sheboygan County Lightfoot School in Sheboygan Falls. Though born with disabilities, he succeeded in many ways by overcoming several of his handicaps with the help of many individuals assisting him throughout his lifetime in school, various employment opportunities, RCS, church, family and many social activities.David began school at age three at the Sheboygan Opportunity Center and later attended James Madison Elementary School. At age nine, his parents moved to Hingham and he began attending Lightfoot School. The highlight and most memorable event during David's time at Lightfoot was being a member of the soccer team and traveling to Baton Rouge, LA to participate in the International Special Olympics tournament. Upon graduation, he worked part-time at various places of employment, experiencing many different types of work. His most gratifying job was the twelve years employed at Culver's as a Dining Room Attendant. Due to the onset of dementia he began attending RCS, packaging parts for their clients. After several years, declining health prevented his continued work. Other interests and activities that David enjoyed were: playing ball with brothers and neighborhood boys, biking trips with his parents, making many latch hook rugs, flying to Florida in the winter to spend time with his parents. Monday evenings were always special by being a part of Friendship Ministries. To sum it up, David led a very active life and enjoyed many different things.For more than twenty years he shared an apartment with his best friend, Tyler Hake. With some part-time daily assistance by Homes For Independent Living (HIL), both men enjoyed their independent living experience. As his health began to decline, he moved to "Our Home" for several years (a group home located in Oostburg). Diagnosed with dementia and needing more assistance, he no longer was able to work at RCS and was moved to Cedar Grove Gardens, an assisted living facility. After spending several months there, he was moved to Sunny Ridge Rehabilitation Center. At all of the care facilities, he received wonderful, compassionate care from the many dedicated staff persons. David is survived by his parents, three brothers, Joel (Debbie), Kevin, and Randal (Sarah) Harmeling, all of Hingham; and a sister-in-law, Cindy (Brian) Schumacher, of Oostburg; the pride and joy of his life were his nieces & nephews; Stacy, Garret (Cassie), Caleb, Nickolas, Drake, Alex, Elizabeth, Marly, Andrew, Alyssa, Hannah, Elijah, Naomi, Ben, Micah, Jordan and Luke. He is further survived by many other relatives and friends.David was preceded in death by one brother, Robert Todd Harmeling; his grandparents, Jonathan and Lillie Harmeling, Robert and Gertrude Tenpas and aunts and uncles. Visitation will be held Wednesday, March 13 from 1:00 pm to 4:00 pm at the Wenig Funeral Home in Oostburg, with a 4:00 pm memorial service to follow celebrating David's life. Dr. Paul Thyren of Grace Bible Church, Adell, will conduct the service. A private family graveside service will be in Hingham Cemetery at a later date.In lieu of flowers, memorial gifts may be made to Our Home Christian Ministries, Friendship Ministries and Grace Bible Church.For online condolences and additional information please visit www.wenigfh.com.The Wenig Funeral Home of Oostburg (920-564-2771) is serving the Harmeling family with arrangements.

To order memorial trees or send flowers to the family in memory of David Harmeling, Jr., please visit our flower store.