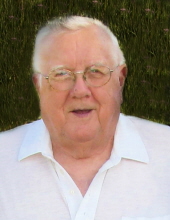 Donald Benedict Fanslau, 93, of Sheboygan Falls, passed away on Tuesday, June 25, 2019, at Sunny Ridge Health and Rehab Center. Donald was born on August 16, 1925, in Two Rivers, WI to Arthur & Matilida (Jacques) Fanslau.Donald married Carole Kiel in Manitowoc and was employed at Sheboygan Box many years until his retirement. He was a member of Trinity Lutheran Church in Dundee. He enjoyed woodworking, fishing, and camping.Donald is survived by his two daughters, Carla (Robert) Lade of Florence, WI, Gloria Klumb of Sheboygan Falls; one son, Ronald (Linda) Fanslau of Sheboygan; three grandchildren, Tabatha (Steve) Detiege, Gary Klumb (Cherish), James (Brittney) Fanslau; and numerous great-grandchildren.Donald was preceded in death by his wife, Carole Mae Fanslau; three sisters, Rose Raack, Elizabeth VanLannen, and Janet Brandt; one brother, Harold Fanslau, a granddaughter, Tina Fanslau; and an infant grandson. Friends and family may call the Wenig Funeral Home in Sheboygan Falls from 11 am until 12:30 pm on Friday, June 28, 2019. A funeral service to celebrate Donald's life will be held on Friday at 12:30 pm. Entombment will be held at Greenlawn Memorial Park. Memorial contributions can be made in his name. For online condolences and additional information please visit www.wenigfh.com. The Wenig Funeral Home of Sheboygan Falls (920-467-3431) is serving the Fanslau family with arrangements.

To order memorial trees or send flowers to the family in memory of Donald Fanslau, please visit our flower store.