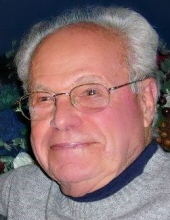 Donald Edward Harder, 101, of Oostburg, passed away on Friday, February 7, 2020.Don was born on January 18, 1919, in Minneapolis, MN to Edward and Alma (Meschke) Harder. He was a graduate of Fairmont High School. On April 7, 1943, Donald married Phyllis Hinrichsen in San Antonio, TX. They enjoyed 74 years of marriage together. Donald was employed at Fairmont Railway Motors for 35 years as a Pattern Maker until his retirement in 1972.He was a member of First Presbyterian Church of Oostburg. He was also a member of the Boy Scouts of America, having achieved the rank of Beaver. Don was proud to have served his country during WWII in the US Air Force flying 31 bomber missions in a B24 over occupied Europe as a Radio Operator/Gunner. He was extremely handy in woodworking, and enjoyed sports, hunting, and golf. Don especially cherished the many wonderful relationships he had with many people throughout his life. Donald is survived by his daughter, Janee (Paul) McCallum; three grandchildren, Mark (Tina) Hall, Scott (Angela) Hall and Matt (Dannyel) Hall; five great-grandchildren, Brandon, Blake, Justin, Rehn and Carsyn; daughter-in-law, Joni Harder; two sisters, Wanda Anderson and Joann Montgomery; and a brother, Richard Harder. Donald was preceded in death by his parents Edward and Alma; dear wife, Phyllis; and son, Douglas Harder. A memorial service to celebrate Don's life will be held on Monday, February 17, 2020, at 12:00 pm at First Presbyterian Church of Oostburg with Rev. Brian Jacobson officiating. Relatives and friends may greet the family at First Presbyterian Church of Oostburg on Monday, February 17, 2020 from 10:00 am until the time of service at 12:00 pm. A memorial fund is being established in his name for First Presbyterian Church of Oostburg.For online condolences and additional information please visit www.wenigfh.com. The Wenig Funeral Home of Oostburg (920-564-2771) is serving the Harder family with arrangements.

To order memorial trees or send flowers to the family in memory of Donald Harder, please visit our flower store.