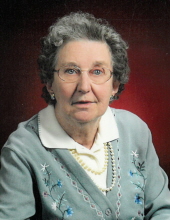 Doreen F. Young, 89, of Sheboygan Falls, entered eternal life on Monday, September 16, 2019, at Pine Haven Christian Communities- Giddings Avenue. Doreen was born on January 1, 1930, in Plymouth, daughter of Roland and Edna (Langner) Johanning. She graduated from Bonnie View Grade School, Waldo High School, and business school in Tucson, Arizona.Doreen met SP/6 Donald F. Young while he was stationed at Camp Haven outside of Sheboygan. They were married on November 8, 1952. Donald was transferred to Bad Kreuznach, Germany, where Doreen joined him the following year. For the next 16 years Doreen joined Donald at Army bases in France, Hawaii, Alabama, Missouri, West Virginia, Maryland, North Carolina, and Wisconsin. In 1968, Donald retired from the Army and they moved to Sheboygan Falls, Wisconsin.Doreen had worked at the Plymouth Lakeshore and Wisconsin Power & Light before her marriage. After retiring, Doreen worked for 21 years at the former J. C. Penney store at the Mall on Taylor Drive.Doreen was a longtime member of St. Paul Lutheran Church in Sheboygan Falls. She volunteered at Bethesda in Sheboygan, was a member of Retired Servicemen's Wives Club, the J. C. Penney Retirees Breakfast Club, and Senior Meal Site in Sheboygan Falls. She enjoyed sewing, quilting, gardening, and visiting family and friends.Doreen is survived by two sons, David D. (Wendy) Young and Dean D. (Paula) Young; one daughter, Debra Young; six grandchildren, Adam (Jennifer) , Derek, Cody (Nicole), David (Jess), and Tyler (Sarah), Sherry (Steve); six great-grandchildren; one brother, Robert Johanning; and many nephews, nieces, and friend.Doreen was preceded in death by husband Donald in 2004, her parents in 1991; brother, Kenneth Johanning, and sister-in-law, Judy Johanning. Funeral services to celebrate Doreen's life will be held at the Wenig Funeral Home of Sheboygan Falls on Monday, September 23, 2019, at 12 pm. Relatives and friends may gather at the funeral home from 11 am until the time of service at 12 pm. Entombment will take place at Gardens of Peace Mausoleum in at Greenlawn Memorial Park. Memorial contributions can be made in her name for St. Paul Lutheran Church and Sharon Richardson Community Hospice. The family would like to extend a special thanks to a dear friend and volunteer, Jane Shanahan, for her time, friendship, and care of mom over the years. Also, a special thank you to the staff of Pine Haven Christian Communities and Sharon S. Richardson Community Hospice for their compassionate service. For online condolences and additional information please visit www.wenigfh.com The staff of the Wenig Funeral Home of Sheboygan Falls (9201-467-3431) is assisting Doreen's family with arrangements.

To order memorial trees or send flowers to the family in memory of Doreen Young, please visit our flower store.