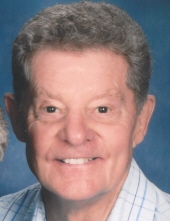 Douglas Edgar Widder,82, of Sheboygan Falls, passed away on Monday, May 28, 2018, at the Sheboygan Senior Community. Doug was born on August 30, 1935, in Sheboygan, to Edgar and Hildegarde (Wesener) Widder. He was a 1954 graduate of Sheboygan Central High School. He served his country in the United States Army from 1954-1957. On October 29, 1971, Doug married Susan Lauff in Sheboygan. He was employed at Tecumseh for 32 years as a laborer. Doug was a member of St. Paul Lutheran Church in Sheboygan Falls. He enjoyed watching the Brewers, watching his grandsons play ball, sharing conversations about cars with his son, and spending time Up North every year with his family.  Doug is survived by his wife, Susan Jean Widder; son, Scott (Kelli) Widder; two grandchildren, Brent Widder and Drew Widder; one sister, Judith (Gene) Reinemann; mother-in-law, Jean (Jon) Nelson; and two brothers-in-law, Jerry (Patti) Lauff, and Bob (Nancy) Lauff. He is further survived by nieces, nephews, other relatives and friends.  Doug was preceded in death by his parents; grandson, Collin Richard Widder; and father-in-law, Richard Lauff. A funeral service to celebrate Doug's life will be held on Friday, June 1, 2018, at 7pm, at the Wenig Funeral Home in Sheboygan Falls with Rev. Tom Gudmundson officiating. A burial will take place at Sheboygan Falls Cemetery. Relatives and friends may greet the family at the funeral home on Friday, June 1, 2018, from 4pm until the time of service at 7pm.  A memorial fund is being established in his name. The family wishes to extend a heartfelt thank you to the staffs at both the Sheboygan Senior Community Center and Pine Haven Christian Home for all their care and compassion they gave to Doug. For online condolences and additional information please visit www.wenigfh.com.  The Wenig Funeral Home of Sheboygan Falls (920-467-3431) is serving the Widder family with arrangements.

To order memorial trees or send flowers to the family in memory of Douglas Widder, please visit our flower store.