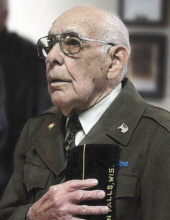 Edgar L. Kuhlow, 100, of Sheboygan Falls, passed away on Wednesday, April 10, 2019 at Sharon S. Richardson Community Hospice.Edgar was born on June 18, 1918 in the Town of Sheboygan Falls to Julius and Emma (Rautmann) Kuhlow. He attended Monroe Grade School in the Town of Sheboygan Falls and graduated from Sheboygan Falls High School in 1936.During WWII he served in the United States Army for three years. He was in the European Theater, spending the last seven months of the war as a Prisoner of War in Germany.  On July 28, 1945, Edgar married Ruth Krueger at St. Paul Lutheran Church in Sheboygan. She preceded him in death on December 30, 1997.Edgar and Ruth lived in the Town of Sheboygan Falls for 36 years on a farm which they owned and operated for about 20 years.  For 25 years, Edgar was employed by the United States Postal Service as a Rural Mail Carrier, until he retired in 1980.Edgar was a member of St. Luke Lutheran Church in Sheboygan Falls, the National Rural Letter Carriers Association, The American Legion Post 149, American EX-Prisoners of War, and the Senior Center of Sheboygan Falls.Edgar is survived by his two sons, Dennis Kuhlow and Keith (Tessie) Kuhlow; four grandchildren, Rebecca, Brett, Craig and Kristina; one great-grandchild, Husdon; four step grandchildren; and three step great-great grandchildren. He is further survived by nieces, nephews, other relatives and friends.Edgar was preceded in death by his parents; his wife, Ruth; three brothers, Herbert (Irma) Kuhlow, Melvin (Virginia) Kuhlow and Harvey Kuhlow; parents-in-law; and one sister-in-law, Caroline Heineke.A funeral service to celebrate Edgar's life will be held on Tuesday, April 16, 2019 at 11 am at St. Luke Lutheran Church in Sheboygan Falls with Rev. Elizabeth Jaeger officiating. Burial will be at St. Lucas Cemetery in the Town of Sheboygan Falls.Relatives and friends may greet the family on Monday, April 15, 2019 at the Wenig Funeral Home in Sheboygan Falls from 4-7 pm and again on Tuesday, April 16, 2019 at the CHURCH from 9 am until the time of service at 11 am.  A memorial fund is being established in his name.The family wishes to extend a heartfelt thank you to the doctors and nurses at Aurora Sheboygan Memorial Medical Center and the entire staff of Sharon S. Richardson Community Hospice for all their care and compassion they gave to Edgar.For online condolences and additional information please visit www.wenigfh.com The staff of the Wenig Funeral Home of Sheboygan Falls (920-467-3431) is assisting the Kuhlow family with arrangements.

To order memorial trees or send flowers to the family in memory of Edgar Kuhlow, please visit our flower store.