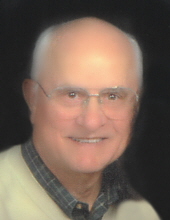 Ellwood Allan Klompenhouwer, 80, of Oostburg, passed away on Sunday, May 3, 2020, at Pine Haven Christian Home.Woody was born on October 8, 1939, in Sheboygan, WI to Garret and Jessie (Allman) Klompenhouwer. He was a graduate of Oostburg High School. On December 19, 1959, Woody married Janet Nyenhuis in Oostburg. He was employed at Kohler Co. as a Foreman until his retirement in 2001.He was a longtime member of Bethel Orthodox Presbyterian Church in Oostburg where he provided service as a Deacon and Elder. Woody was also a member of the Quarter Century Club. He enjoyed golf, camping, and attending his children's and grandchildren's sporting events. He was a true friend to many. Woody is survived by his wife, Janet; two daughters, Terri (Steve) Joosse and Heidi (Brad) Sweet; son, Greg (Heidi) Klompenhouwer; eight grandchildren, Kate (Jake) Ratajczak, Alison (Scott) Simpson, Maria Joosse, Garret Klompenhouwer, Megan Klompenhouwer, Tyler Sweet, Haley Sweet, Hunter Sweet; four great-grandchildren, Finn, Nora, Maeve, Will; and three sisters-in-law, Joan Flipse, Judy Dirkse and Pat (Steve) Fikkert. Woody was preceded in death by his parents Garret and Jessie; sister, Joyce Mae (Bill) Soerens; and two brothers-in-law, Roger Dirkse and Robert Flipse. A funeral service to celebrate Woody's life will be held on Friday, May, 8 at 11:00 am with Rev. Dave Veldhorst officiating. Those who would like to live stream the funeral service may join the "Woody Klompenhouwer Funeral Service" Facebook group by visiting the Wenig Funeral Homes Facebook page. A burial will take place at Hartman Cemetery.A memorial fund is being established in Woody's name for Oostburg Christian School and Bethel OPC. Special thanks to the staffs at Pine Haven Christian Communities and SSRCC, along with many close friends for their help and support.For online condolences and additional information please visit www.wenigfh.com. The Wenig Funeral Home of Oostburg (920-564-2771) is serving the Klompenhouwer family with arrangements.

Please click here to view the video tribute
To order memorial trees or send flowers to the family in memory of Ellwood Klompenhouwer, please visit our flower store.