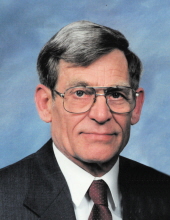 Eugene Wisse was born on February 6, 1939 to George & Kathryn (Roelse) Wisse in Cedar Grove and passed away on September 19, 2020 in Sheboygan.  He attended eight grades in a rural two-room school at South Cedar Grove and graduated from Cedar Grove High School in 1957.  Eugene served his country in the US Army from 1958-1960, then was employed at Kiekhaefer Marine (Cedarburg) for four years; at Bolens/Troy Corporation (Port Washington) for 34 years, and at Trak Corporation (Port Washington) making military equipment for three years, until his retirement in 2001.  In retirement, he was employed at Ongna Wood Products and Dutchland Plastics.Eugene married Sharon Meerdink on September 16, 1961 and they lived in Cedar Grove and Oostburg.  He loved Sharon and the four sons she gave him.  He loved watching his sons grow up, seeing basketball, academic and hunting successes.  In retirement, he enjoyed watching his grandchildren play basketball, soccer and volleyball.  He loved gardening and cash-crop farming, was a former Sunday school teacher, deacon and elder at his church; and served on the Oostburg Christian School board.Surviving him are his loving wife of 59 years, Sharon; sons Kurt (Julie), Steven (Melanie), Timothy (Annette) and Chad (Cheri) all of Oostburg; grandchildren April (Luke) Launer, Brandon and Erin Wisse; Alec and Trevor Wisse; Halie (Eric) Henley, Jackie (Jordan) Molter, and Carissa (Ed) Windsor, Brady and Brynn Wisse; great-grandchildren Aubrey and Landon Launer.  He is also survived by his sister, Marianne Lammers, brother-in-law Glenn (Lorainne) Lemmenes and sister-in-law, Delores Droppers.Preceding him in death were his parents, his parents-in-law, Harley and Ellen Meerdink, a sister, Priscilla Lemmenes, and brothers-in-law, Lamont Lammers and Dale Droppers.A funeral service will take place at Oostburg First Christian Reformed Church on Thursday, September 24, 2020, at 11:00 am with Pastor Drew Zylstra officiating. Visitation will take place from 9:00 am until 11:00 am.  Burial will take place at Union Cemetery. Wearing a facemask and social distance are required. A livestream of the service will be made available at 11am by visiting www.facebook.com/groups/eugenewisse . In lieu of flowers, memorial contributions can be made in his name for Oostburg First Christian Reformed Church and the Oostburg Ambulance.The Wenig Funeral Home of Oostburg (920-564-2771) is serving the family.

Please click here to view the video tribute
To order memorial trees or send flowers to the family in memory of Eugene Wisse, please visit our flower store.