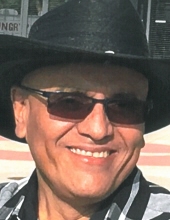 Eustacio Medina, Jr., 58, of Sheboygan, passed away on Saturday, April 28, 2018 at his home with his family by his side.Eustacio was born on October 17, 1959 in Brownsville, Texas to Eustacio and Maria (Padron) Medina. He was a 1979 graduate of Porter High School. On May 24, 1980 he married Melva Castro. Eustacio was a retail manager for Mac Rents in Kingsville, Texas. In 1997 he moved the family to Sheboygan, Wisconsin. While he was here, he worked last as a truck driver for Estes.Eustacio was a member of St. Clements Catholic Church. He was a board member of the Sheboygan Historical Society, Partners for Community Development, Chamber of Commerce (TX), Lion's Club (TX), Historical Preservation of Downtown Kingsville, TX, a Hispanic Service Club President, a Sheboygan County Board Supervisor, a coach for little league baseball and adult league baseball.  Eustacio enjoyed collecting old model cars, attending music events, being a DJ and playing music for people, riding his motorcycle, cheering for the Dallas Cowboys, traveling with his wife, Melva, and loved spending time with his family, especially his grandchildren.Eustacio was survived by his loving wife, Melva; his children, Janell (Tim) Dolfin, Justinn Medina and Jonathan Medina; grandchildren, Viviana, Adrian and Dominic Dolfin; father and mother, Eustacio Sr. and Maria Medina; brothers and sisters, Gloria (Santiago) Fuentes, Vicenta Medina, Ricardo ( Teresa) Medina, Patricia Medina, Virginia Medina, Maria (Scott) Brusse, Veronica (Michael Schwarten) Medina and Jose Luis ( Chrissy Mikulice) Medina; mother-in-law, Teodula Castro; brothers-in-law and sisters-inlaw, Juan (Ana) Castro, Arnold (Leticia) Castro, Mary (Jorge) Rosales, Gerado (Yvette) Castro and Veronica (Jose) Nava; and a special niece and nephew, Amanda Salazar and Cesar Salazar. He is further survived by nieces, nephews, other relatives and friends.Eustacio was preceded in death by his grandmother, Viviana Savedra; and father-in-law, Regulo Castro.A Mass of Christian Burial will be held on Wednesday, May 2, 2018 at St. Clement's Catholic Church in Sheboygan at 12pm with Rev. Giddeon Buya officiating. Burial will be at Greendale Cemetery.Relatives and friends may greet the family on Tuesday, May 1, 2018 at the Wenig Funeral Home in Oostburg from 4-7pm and again on Wednesday, May 2, 2018 at the CHURCH from 10am until the time of service at 12pm.A memorial fund is being established in his name.For online condolences and additional information please visit www.wenigfh.com The staff of the Wenig Funeral Home in Sheboygan Falls (920-467-3431) is assisting the Medina family.

To order memorial trees or send flowers to the family in memory of Eustacio Medina, please visit our flower store.