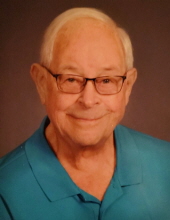 Gerald J. Lammers, 86, of Oostburg, went home to be with His Lord, Thursday, December 3, 2020, at St. Nicholas Hospital.  Jerry was born on January 9, 1934, in Oostburg son of Benjamin and Lena (Dulmes) Lammers.  He was a graduate of Oostburg High School.  Jerry served in the United Armed Forces from 1954 until 1955.  On September 30, 1953, he married Ann R. Lensink. Jerry was employed with Honold & LaPage, Wolf Laundry, and Simplicity Mfg. He was co-owner of Dutch Treat Restaurant with Rich and Verla Nyenhuis.Jerry was a lifelong member of First Reformed Church in Oostburg, where he served as elder and deacon.  He was a member of the choir for over 50 years, a member of the Messengers Quartet, and served as Sunday school superintendent.  Jerry was also active in the community, serving as a Boy Scout leader, member of the Oostburg Fire Dept. for 27 years, and was a charter member of the Oostburg Rescue Squad.  He enjoyed golfing, fishing and hunting.Jerry was survived by his wife of 67 years, Ann; his children, Susan (Philip) Jensema and Jeffrey (Kathleen) Lammers; two grandchildren, Elissa (Paul) Retkowski and Jessica (Kevin) Dekker; seven step-grandchildren, Melissa (Jason) Kimme, Jason (Amanda) Eiring, Tom (Kelly) Walzer, Jason (Andrea) Walzer, Paul (April) Jensema, Jennifer (Lance) Wulf, and Jessica (Chris) Ten Haken; six great-grandchildren, Lydia, Naomi, and Hannah Retkowski, and Carson, Anthony, Josie Dekker; and 19 step-great-grandchildren, and one great-great grandchild. Jerry is further survived by his sister, Amy Goebel, four sisters-in-law, Mary Theune, Sandra Van Stelle, Laurel (John) Fischer, and Sue Lensink; and two brothers-in-law, Daniel (Lana) Lensink and Mark (Joanne) Lensink.Jerry was preceded in death by his parents, and his infant son, David John Lammers, his step-father, Peter Morell, and six brothers-in-law, William Lensink, Paul Lensink, Keith Ten Haken, Warren Theune, Donald Goebel, and John Van Stelle.A funeral service to celebrate Jerry's life will be held at First Reformed Church of Oostburg on Wednesday, December 9, 2020, at 11:00 am with Pastor Brian Taylor officiating. A visitation will take place at church on Tuesday from 3:00 pm to 6:00 pm and again on Wednesday from 10:00 am until the time of service at 11:00 am.  Wearing a face mask and social distancing are required. A private family burial will take place at Oostburg Cemetery. A livestream of his service can be joined on Wednesday at 11:00 by visiting www.facebook.com/groups/JerryLammers A memorial contribution can be made in Jerry's name. For online condolences and additional information please visit www.wenigfh.com The staff of the Wenig Funeral Home of Oostburg (920-564-2771) is assisting Jerry's family with arrangements.

Please click here to view the video tribute
To order memorial trees or send flowers to the family in memory of Gerald Lammers, please visit our flower store.