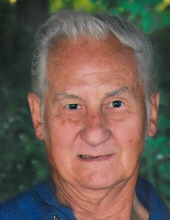 Henry "Hank" J. Englebert, 83, of Sheboygan, entered eternal life on Wednesday, April 4, 2018, at St. Nicholas Hospital in Sheboygan.Hank was born on July 10, 1934, in Sheboygan, WI, to Henry and Mabel (Noel) Englebert. He was a graduate of Sheboygan Central High School. He faithfully served our country in the U.S. Army from 1957 to 1959. On May 12, 1956, Hank married his best friend, Marilyn Wiech, at Broadway Avenue Gospel Chapel in Sheboygan. Hank was employed as a Semi Driver for Badger Freightways, Meves Transport and Advanced Trucking until his retirement at the age of 60. Following retirement, Hank and Marilyn enjoyed many years of wintering in Florida. There they made new friends, enjoyed the various music festivals, farmers markets and spent Saturday evenings at Old Town car cruises in Kissimmee Florida.Hank also enjoyed participating in various car shows and cruises both locally and statewide. His greatest pleasure was spending time in his garage fixing, tinkering and shining his numerous vehicles, as well as those of friends and family. Many Saturday nights were spent at Plymouth stock car races with fellow car enthusiasts. Evenings sitting around a campfire gave him great pleasure. He had a love for music, attending a variety of festivals, fairs and outdoor events. He was often seen bicycling about town, putting on many miles well into his 70's. Hank and Marilyn especially enjoyed many evenings of fun and laughter with a close knit group of retired truckers and their spouses. Above all, Hank cherished visits from family, friends, neighbors or anybody who would drop by. Hank had a fondness for all dogs and could not pass one by with stopping and making them his friend.Hank is survived by his loving wife, Marilyn Englebert; two daughters, Christine (Jeff Kutzner) Siefert and Elizabeth (Jon) Weavers; two sons, Harlan Englebert and Jay (Julie) Englebert; seven grandchildren, Jessica (Shane) Goodwin, Julie (Will) Malone, Zachary Siefert, Jayden Weavers, Taryn Weavers, Jake Englebert, Tessa Englebert; five great-grandchildren; and a sister, Darlene Guikema. Hank was preceded in death by his parents, Henry Sr. and Mabel Englebert; four sisters, Hildegarde Weinkopf, Dulcine Pierce, Carole Ernestine Kind, JoAnne Kleyn; and a brother, Harris Englebert.A memorial service to celebrate Hank's life will be held on Friday, April 13, 2018, at 6:00 pm at Wenig Funeral Homes in Oostburg with Rev. Jeremy Hylen officiating. Relatives and friends may greet the family at the funeral home on Friday, April 13, 2018 from 3:00 pm until the time of service at 6:00 pm. A memorial fund has been established in Hanks name to the Stars and Stripes Honor Flight Network, which he had the privilege to experience on November 2nd, 2013. It is our families belief that all Veterans should be afforded this opportunity.A heartfelt thank you is extended to the St Nicholas Hospital Emergency Room Doctors, Nurses and Chaplins. For online condolences and additional information please visit www.wenigfh.com. The Wenig Funeral Home of Oostburg (920-564-2771) is serving the Englebert family with arrangements.

To order memorial trees or send flowers to the family in memory of Henry Englebert, please visit our flower store.