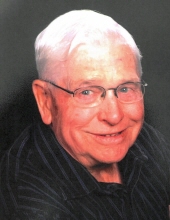 Garrit Ledeboer, 89, of Oostburg, died with his family at his side on Monday afternoon, August 26, 2019 at Pine Haven Residential Home where he had resided since February.Garrit was born on April 23, 1930 in Harrison, SD, the son of John and Gertie (Ruesink) Ledeboer. Garrit went to Armour Grade School in Armour, SD. He then served in the US Army from 1951-53 and was escorted by his daughter, Pam, on the Honor Flight to Washington DC in 2014. On April 5, 1951 he married Muriel Heinen in Cedar Grove. Garrit, along with his wife, Muriel owned and operated Gary Lee Farms in the Town of Wilson for many years, a farm now operated by his son, Todd. Their farm hosted two Sheboygan County Dairy Breakfasts over the years. Garrit also drove school bus for five years. He and Muriel opened their home and hearts to numerous foster children over the span of 25 years.Garrit was a longtime and faithful member of the First Reformed Church in Oostburg where he served as an usher. He was an active member of the Sheboygan County Farm Bureau, the Tri-County Pork Producers, and the American Legion. He traveled to 49 states, Canada and Europe. He also enjoyed reading, hunting and attending family events and activities. Garrit was a fan of the Green Bay Packers and Milwaukee Brewers.Garrit is survived by his wife of 68 years, Muriel; three daughters, Kay (Gary) Huenink of Oostburg, Pam (Kim) Simmelink of Sheboygan Falls, and Joy (Mark) Dulmes of Holland, MI; one son, Todd Ledeboer of Oostburg; seven grandchildren, Joshua (Carolyn) Huenink, Jeremy (Nancy) Huenink, Colin Simmelink, Brian (Ceanne) Simmelink, Jay (Sandi) Dulmes, John (Nicole) Dulmes, and Eric (Kate) Dulmes; 14 great grandchildren; one brother, Willis (Carol) Ledeboer of Oostburg; one sister-in-law, Phyllis Ledeboer of Oostburg; and two brothers-in-law, Dale (Carolee) Heinen of Waukesha and Harold "Archie" Soerens of Sheboygan Falls. Garrit is also survived by his numerous foster children; many nieces and nephews; and faithful friends and dedicated employees, Glen, James and Zach.Garrit was preceded in death by his parents, two sisters, Lela (Gerald) VanderPlas, Josie (Gidean) Fuerst; two brothers, Edward and Lloyd (Leona) Ledeboer; and a sister-in-law, Lois Soerens.A funeral to celebrate Garrit's life will take place at the First Reformed Church in Oostburg on Friday, August 30, 2019 at 2 pm with the Revs. Bob Rook and Brian Taylor officiating.  Entombment and Military Honors will take place at Sunrise Memorial Gardens in the Town of Wilson.Family and friends will gather at the Wenig Funeral Home in Oostburg on Thursday from 4-7 pm, and on Friday, at church from 1 pm until the time of the service at 2 pm.For online condolences and additional information please visit www.wenigfh.com A memorial fund is being established in his memory for the First Reformed Church, Sharon S. Richardson Community Hospice, Oostburg Ambulance and Honor Flight.The Ledeboer family would like to express their heartfelt appreciation to the staffs of Pine Haven Residential Home and Sharon S. Richardson Community Hospice.The staff of the Wenig Funeral Home in Oostburg (920-564-2771) is serving the Ledeboer family.

To order memorial trees or send flowers to the family in memory of J. Ledeboer, please visit our flower store.