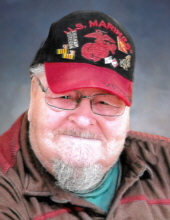 Jim was born on March 19, 1946, in the Town of Draper, WI to Ray and E. Helen (MacFarland) Cummings. He was a 1966 graduate of Winter High School. Jim honorably served his county in the United States Marine Corps from 1966 to 1970, including a one-year deployment to Vietnam during the war.

On October 20, 1972, Jim married Shirley Burr in Sheboygan. He was employed at Kohler Co. as a Production Worker until his retirement in 2008.

He was a member of St. Paul Lutheran Church in Sheboygan Falls. He was a lifetime member of the Marine Corps League, DAV, DAV Auxiliary, and VFW Post #9156. Jim was a retired UAW Associate Member of Local 833. He enjoyed watching westerns and sports on TV, jigsaw puzzles, handheld solitaire, fill-in puzzle books, helping Shirley with her quilting, and folding clothes. Jim was very proud of his raspberry bushes. He especially loved hanging out with his grandchildren picking berries and camping.

Jim was preceded in death by his parents, Ray and Helen; parents-in-law, Elmer and Martha Burr; and sister-in-law, Jeannie Burr.

A funeral service to celebrate Jim's life will take place at St. Paul Lutheran Church in Sheboygan Falls on Saturday, April 17, 2021 at 12:30 pm with Pastor Kyle Backhaus officiating. Visitation will take place from 11:30 until the time of service. Those unable to attend are welcome to join the service via livestream at 12:30 by visiting www.wenig.live/JamesCummings . A private burial and committal took place last year at Sheboygan Falls Cemetery.

A memorial fund is being established in his name for St. Paul Lutheran Church, Marine Corps League and VFW.

A special thanks to all the EMTs, doctors and nurses over the years for their hard work and compassionate care.

The Wenig Funeral Home of Sheboygan Falls (920-467-3431) is serving the Cummings family with arrangements.

To order memorial trees or send flowers to the family in memory of James Cummings Sr., please visit our flower store.