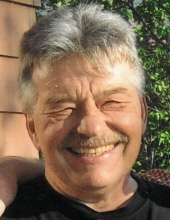 James R. Justus, 74, of Cedar Grove, passed away peacefully on Saturday, December 26, 2020 at Rocky Knoll Health Care Center. Jim was born on January 14, 1946, in Milwaukee, to Walter and Frieda (Martin) Justus. He was a graduate of John Marshall High School in Milwaukee in 1964. Jim went to Northern Michigan University on a football scholarship, where he received his undergraduate degree. He went on to University of Wisconsin - Stout, where he received his Masters degree. On January 28, 1967, Jim was united in marriage to Sharon Peters in Milwaukee. Jim was a teacher at Wilbur Wright Middle School and Milwaukee Boys Tech for a year before Jim and Sharon moved to the Oostburg/Cedar Grove area in 1969, where he taught at Oostburg High School for 33 years until his retirement in 2004.  He was a Past Master and District Lecturer of Sheboygan Masonic Lodge. He enjoyed being in the woods, hunting at the cabin up north, and playing chess. Jim had a passion for teaching his students and enjoyed coaching football and wrestling. He enjoyed riding bikes, motorcycles, and four-wheelers. Jim collected trains and making layouts for them to show to others.  Jim is survived by his wife of 57 years, Sharon; two sons, Curt (Pam) Justus, Eric (Heidi) Justus; eight grandchildren, Heather, Kayla, Jennifer, and Andrew Justus, Lara, Jason, Max, and Molly Justus; brother, Dale (Sylvia) Justus; sisters-in-law, Karen Justus, Barbara Justus, Kathie (Gary) Jablonski, Sherry Smith; brother-in-law, George (Jeanine) Peters; nieces, nephews, other relatives, and friends. Jim was preceded in death by his parents; father-in-law, George Peters; brothers, Norman and Dennis Justus; and sister, Cherie Justus. A private memorial service to celebrate Jim's life with Pastor Myron Duschaine officiating. All are welcome to join via livestream by visiting www.wenig.live/jamesjustus on Wednesday, January 6th at 6:00 pm. Relatives and friends may greet the family at Wenig Funeral Home in Oostburg on Wednesday, January 6th for a time of visitation from 3:30 pm until 6:00 pm. Masks and social distancing are required. A memorial fund is being established in his name for the Oostburg and Cedar Grove Wrestling Programs. For online condolences and additional information please visit www.wenigfh.com.  The Wenig Funeral Home of Oostburg (920-564-2771) is serving the Justus family with arrangements.

Please click here to view the video tribute
To order memorial trees or send flowers to the family in memory of James Justus, please visit our flower store.