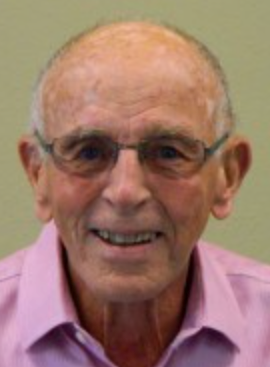 Jay was born at home on March 16, 1939, in Long Island, Kansas to Herman and Hattie Pakkebier.  He came into the world as a preemie and was kept warm in his Dad’s boot box, on the family’s copper clad stove.  Jay and his family moved to South Dakota when he was in the 3rd grade.  Jay was a 1957 graduate from Corsica High School.

Jay moved to Wisconsin in 1960 and began work at Gabe’s Construction.  Later that year, he began his apprenticeship at the Sheboygan Glass Company, where he worked for 42 years as a Glazier.  Jay met his best friend, Mary Van Stelle of Oostburg and they were united in marriage on February 16, 1963, at Gibbsville Reformed Church. They enjoyed nearly 50 years together.

Jay was a long-time member of Bethany Reformed Church in Sheboygan, where he was a faithful servant of his Lord.  For more than 50 years, he has served as an Elder, Deacon, Sunday School Teacher, Catechism Teacher, Youth Group Leader, Tenor in the Choir and Visitation Team member.  Jay was always active in his children’s school through the PTA and Booster Club.  He served many years as a Cub Scout and Boy Scout Leader for both of his sons. Jay sang with the Pine Haven Men’s Choir and served numerous years with the Oostburg Kiwanis Club.

Jay loved spending time with his family and friends.  He enjoyed camping, fishing and taking his kids water skiing.  His grandchildren meant everything to him, and he would attend their sporting events and concerts whenever he could. He and Mary loved to travel, go to concerts, and went on many Mystery tours.

Jay is survived by one daughter, Monica (Andy) Bonestroo of Sheboygan; two sons, David (Dawn) Pakkebier of Aurora, IL and Curtiss (Lisa) Pakkebier of Cedar Rapids, IA; five grandchildren, Bailea, Matthew, Reid, Cade Pakkebier and Libby Bonestroo; one brother-in-law, Larry (Diane) VanStelle of Oostburg and numerous nieces, nephews, other relatives and special friends.
Jay was preceded in death by his parents, infant sister Eunice, brother Allen Pakkebier, sister-in-law Velma Pakkebier, and mother and father-in-law, David and Margaret Van Stelle.
A funeral service will be held at Bethany Reformed Church in Sheboygan on Monday, November 15 at 11:00 am. Burial will be held at Hingham Cemetery.

Family and friends may greet the family at Wenig Funeral Home in Oostburg on Sunday, November 14, from 4:00 to 7:00 pm and again at church on Monday from 10:00 am until the time of service.

In lieu of flowers, a memorial fund is being established in Jay’s memory for Bethany Reformed Church, as his church family meant the world to him.

To order memorial trees or send flowers to the family in memory of Jay Pakkebier, please visit our flower store.