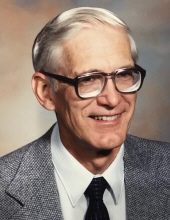 Harold Jay Reenders, 83, of Sheboygan Falls, went home to be with his Lord and Savior, surrounded by his family on Friday, February 1, 2019, at Pine Haven Christian Home. Jay was born on April 9, 1935, in Grand Haven, MI to Martin and Jeanette (Hop) Reenders. He was a 1953 graduate of Grand Haven High School. Jay furthered his education at Central Michigan University, earning his BA and then he obtained his MA at Michigan State University. On August 24, 1957, Jay married Eleanor Rhoda Jesty in Grand Haven, MI. Jay was the band director at Allendale Public School for 15 years, then became the principal at Allendale Elementary School for 19 years until his retirement in 1993. In 2014, Jay was inducted into the Allendale Public School Hall of Fame. After retirement, Jay was the founder and administrator for Grand Rapids Academy for Christian Education (GRACE) for 15 years in Grand Rapids, MI. Jay was a member of Bethel Orthodox Presbyterian Church in Oostburg. Over the years he was  a member of Seventh Reformed Church in Grand Rapids, MI, where he served as elder, adult Sunday school teacher and catechism teacher; during his time at Eastmanville United Reformed Church in Eastmanville, MI, he served as elder; and also served as elder and played the organ at Allendale First Reformed Church in Allendale, MI. Jay was a member of Gideons International. Over the years, he served as editor for FACTS, a monthly Christian newsletter. Jay enjoyed music, riding horses, and competitive horse barrel racing. Jay also loved traveling out west especially to Wyoming, where he lived for 5 years. Jay is survived by his loving wife, Rhoda; four daughters, Susan (Monty) McNaught, DVM of Blunt, SD, Cindy (Clint) Beaver of Sheridan, WY, Sarah (Mark) Rittgers, PhD of Front Royal, VA, and  Symantha Reenders, DPT of Atlanta, GA; one son, BJ (Amanda) Reenders of Oostburg; nine grandchildren, Dustin McNaught, Lindsey, Madison, and Noah Beaver, Nichole and Megan Rittgers, and Austin, Jenna, and Ty Reenders; one brother-in-law, Paul Lampe of Grand Haven, MI; and three nieces, Marta, Paula, and Betsy.  Jay was preceded in death by his parents; one granddaughter, Melissa Beaver; and one sister, Mariann Lampe.  A funeral service to celebrate Jay's life will be held on Thursday, February 7, 2019, at 11 am at Bethel OPC in Oostburg, with Rev. David Veldhorst officiating. A burial will take place at Oostburg Cemetery. Relatives and friends may greet the family at Bethel OPC in Oostburg, on Thursday, February 7, 2019, from 10 am until the time of service at 11 am. There will be a memorial visitation on Saturday, February 9, 2019 at Eastmanville United Reformed Church in Eastmanville, MI from 1-4 pm.  A memorial fund is being established in his name for Gideons International. For online condolences and additional information please visit www.wenigfh.com.

To order memorial trees or send flowers to the family in memory of Jay Reenders, please visit our flower store.