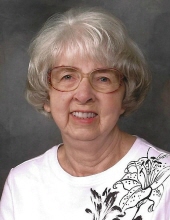 Jeanne LeMahieu, 90, passed away September 25th, 2018 at Prairie Place in Ripon, WI. Jeanne was born April 26th, 1928, the daughter of the Late George and Amelia (Rauschert) Towne in Batavia, WI.  She was baptized in Sheboygan Falls with the name Jeanette Anita Ann Towne but has been known as Jeanne her entire life.  She attended Batavia elementary school and graduated from Plymouth High School in 1945.  She attended Lawrence College and Mission House College (now Lakeland College). Carl LeMahieu and Jeanne were married on September 27, 1947 at St. Stephen's Lutheran Church in Batavia.  They resided in Plymouth most of their married lives.  Jeanne was employed as a secretary for the Plymouth School District for 24 years, retiring in 1990.  She was a member of Salem United Church of Christ in Plymouth and the VFW Auxiliary, Post 5612 of Plymouth.Carl preceded her in death on January 11th, 1992. Jeanne enjoyed spending time with her family:  Her son Ronald and his wife Nova of Maryville, IL, her son Thomas and his son Tommy of Ripon, and her daughter Kathryn Roeder and her husband Mark and their son Jason of Ripon.  She is also survived by her brother Charles Towne of Greendale, WI and many nieces and nephews.She was preceded in death by her brothers and sisters in law, Judy Towne, Geraldine and Charles Sramek, Melvin and Elizabeth LeMahieu, Ervin and Mary Ann LeMahieu, Edward and Edna LeMahieu, Salina Versnik, Jocena Torsch, Jennie and Andrew Bellinder and an infant, Norman Edward LeMahieu. Funeral services will be held Saturday, September 29th, at 11:00 a.m. at Salem United Church of Christ in Plymouth.  Visitation will take place from 9:00 - 11:00 a.m at the church.  Burial will take place at Woodlawn Cemetery in Plymouth. A memorial fund is being established in Jeanne's name for Salem United Church of Christ. The Wenig Funeral Home (920-467-3431) is serving the family.

To order memorial trees or send flowers to the family in memory of Jeanne LeMahieu, please visit our flower store.