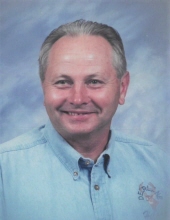 John C. Klopf, 78, was born to parents, Clarence & Josephine Klopf. His final journey to heaven ended battling cancer. His wife and sons, John Jr. & Joseph were at his side. His third son, James (deceased), met him at heaven's gate.John was a hardworking man all his life. He was employed by Bemis Mfg. & Quasius Construction.He married Nancy Klopf on August 12, 1961, and they had three sons. He built his home in Falls (still residence) in 1968, hiring only the excavator. He was the carpenter, plumber, electrician, and was a mason bricklayer by trade.John started his own business April 4, 1977, A/K Masonry Specialists, Inc., with his business partner, David Amel.He built many concrete slabs & basements, stone & brickwork. He built planters & grottos at St. Rose of Lima, St. George Six Corners, St. Mary's Falls, St. John's Kohler. Also, cemetery walls & additions to classrooms. His unique vision of stone fireplaces is seen in many homes which include waterfalls.As a legacy to his sons, family and grandchildren he purchased 80 acres in the Northwoods where he built a log cabin, pond, and 50' bridge to an island.John was an avid hunter, snowmobiler, Harley rider, and did some fishing & swimming. He loved the outdoors and its many wild animals.Son, Joe joined the A/K business in 2000 and John continued to climb chimneys (into his 70's) despite he had two metal knees. He also did estimating jobs until 75. He was one hard worker.John belonged to several card clubs, mostly Sheepshead. All three of his sons and two grandsons attained the Eagle rank in scouts. John was a counselor for scouts earning the masonry badge.He was a faithful member of Blessed Trinity Parish, ushering and volunteering at several Catholic churches. John's strong faith and love of family and friends meant everything to him. His grandchildren and great-grandchildren meant the world to him, keeping up with all their many events.Survivors include his wife of 57 years, Nancy; son, John, Jr. and Barb, grandson Ryan (Jessica), children Chloe and Clara, granddaughter, Katie Rammer (Chris), child, Roman; son, Joseph and Karen, grandson Joey (Sasha), children, Oliver & Christian, granddaughter, Jennifer Rudd (Nick), granddaughters, Jacklyn & Jonell Klopf; daughter-in-law, Karen (Klopf) Perronne and Ron, grandson, Joshua (Carly), child, Josephine, grandson, Jacob; sister, Marlene (Ronald) Krueger; and numerous nieces, nephews, and cousins.John was preceded in death by his son, James L. Klopf and his parents.A Memorial Mass to celebrate John's life will be held at St. John Evangelist Catholic Church in Kohler on Tuesday, May 21, 2019, at 5:30 pm. A private family burial will take place. Relatives and friends may gather at the church from 3:00 pm until the time of Mass at 5:30 pm. Luncheon will follow the Mass. In lieu of flowers, a memorial fund has been established in John's name.The family would like to thank the staffs at Dr. Mark Bettag's office and the Sharon S. Richardson Community Hospice, for their compassionate care.For online condolences and additional information please visit www.wenigfh.com The staff of the Wenig Funeral Home of Sheboygan Falls (920-467-3431) is assisting John's family.

To order memorial trees or send flowers to the family in memory of John Klopf, please visit our flower store.