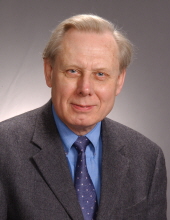 Jon Torger Hougen was born October 23, 1936, in Sheboygan, Wisconsin, and passed away January 28, 2019, in Taipei, Taiwan, where he was attending a meeting of the Institute of Atomic and Molecular Science as a member of the Institute's Scientific Advisory Committee. He will be buried near his parents, aunts, and uncles at Hingham Cemetery in Hingham, Wisconsin.Jon was the oldest child of Dr. Edward Thomas Hougen and Mildred Dulmes Hougen. He attended school in Sheboygan, leaving high school after his sophomore year to enroll at Oberlin College in 1952 as a Ford Foundation Early Entrant. He completed his undergraduate degree at the University of Wisconsin in 1956, then went on to earn his master's and doctoral degrees at Harvard University, where he worked under the research direction of Dr. W. Moffitt and Dr. W. Klemperer. After beginning his career at the National Research Council of Canada, Jon joined the National Bureau of Standards (now the National Institute of Standards and Technology) in 1967. He was originally a member of D.R. Lide's Microwave and Infrared Group, then later Chief of the Molecular Spectroscopy Section. He was named a Senior Research Fellow in 1984 and served for a year as Acting Chief of the Molecular Physics Division. He has continued his research activities as a NIST Scientist Emeritus, going to work almost every day even after retiring in 2001.His research interests were in quantum mechanical and group theoretical calculations of quantities of molecular spectroscopic interest for various cases of interaction between rotational, vibrational, and electronic motion, with particular emphasis on rotational energy levels and rotational line intensities. In addition, Jon was known among his colleagues worldwide for his encyclopedic knowledge of the theory of molecular spectroscopy, as someone always willing to help and advise, and as a lover of languages. He spoke French, German, Czech, Japanese, and Chinese in addition to English. He particularly enjoyed any opportunity to work with young chemists, and he privately helped a number of young people with academic promise but limited means to attend college.Jon was a member and Fellow of the American Physical Society, member of the Optical Society of America, member of the Coblentz Society, and the American Chemical Society. He served on the Editorial Advisory Board of the Journal of Molecular Spectroscopy and the Journal of Chemical Physics. He held visiting appointments at the Institute for Molecular Science in Okazaki, Japan; the University of Dijon, France; Kanazawa University, Japan; Katholieke Universiteit, Nijmegen, the Netherlands; Aachen University and Hannover University in Germany; and the Universite de Paris VI, France. He taught at Carleton University in Ottawa and Howard University in Washington, DC, and he served as a lecturer at Journees d'Etudes on Molecular Electronic Spectroscopy in Tours, France. He received numerous awards and honors for his scientific achievements including the Coblentz Award, the NBS Silver Medal, the NBS Gold Medal, the Plyler Prize from the American Physical Society, the Lippincott Award from the Optical Society of America, and the Marcus Marci Award from the Czech Spectroscopy Society. The Journal of Molecular Spectroscopy dedicated a special issue to him in honor of his 68th birthday in 2004 and for his 80th birthday in 2017. He was a fervent attendant and participant at various spectroscopy conferences in the US and around the world.Jon was a staunch defender of good science and foe of racism and injustice, and in later years he actively supported a number of progressive causes, journalists, and candidates who were fighting for social justice. He also loved to dance, particularly the polka.He was married to Ruth Sandham Hougen, whom he met at Oberlin. Though they later divorced, he remained a dedicated father to their son, Torger Jon Hougen, for the rest of his life. He later married Zhi Jun Duan, and they divorced in 2001.Jon is survived by his son, Torger, and daughter-in-law, Cara Neth, of Fort Collins, Colorado; by his sister, Helen Hancock and her husband, Ben, of California; by his sister-in-law Margaret Hougen of Northampton, Mass, and by numerous nieces, nephews, and cousins with whom he enjoyed visiting as often as possible. He also leaves behind his many close colleagues and friends at NIST and in the international community of spectroscopy, who were truly his people. He was preceded in death by his parents, his first wife, and by his younger brother, Edward T. Hougen of Massachusetts. He will be missed.A funeral service in Jon's honor will be held at the Wenig Funeral Home in Oostburg, Wisconsin, at 11 a.m. on February 20, 2019. Friends and family may greet the family for a time of visitation from 10:30 a.m. until the time of service at 11 a.m. For online condolences and additional information please visit www.wenigfh.com.The Wenig Funeral Home of Oostburg (920-564-2771) is serving the family with arrangements.

To order memorial trees or send flowers to the family in memory of Jon Hougen, please visit our flower store.