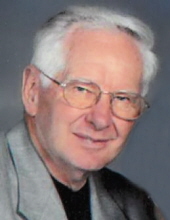 Kenneth K. Painter, 85, of Sheboygan Falls, passed away on Wednesday, September 23, 2020, at the Sharon S. Richardson Community Hospice.Kenneth was born on May 17, 1935, in Sheboygan Falls, son of Cletus and Minnie (Grooms) Painter. He was a 1954 graduate of Sheboygan Falls High School. Kenneth served in the US Army during the Korean Conflict from 1954-1957. On December 3, 1960, he married Gladys Elaine Konrad in Sheboygan. He was a self-employed auto mechanic for many years and then worked in maintenance at the Sheboygan Courthouse until 1997 and the City Church until 2018.Kenneth was a longtime member of City Church of Sheboygan, serving as deacon, maintenance man, sound and technology ministry, bus ministry and a Royal Ranger leader. Kenneth was proud of the many parade floats that he built for church, pulled by a 1919 truck that he built. He was also a member of the Eastern Wisconsin Stock Car Racing Assoc. Kenneth enjoyed stock car racing, hobby farming, and was an avid fan of the Green Bay Packers and the Milwaukee Brewers. He and Gladys enjoyed traveling, having visited 49 states.Kenneth is survived by his wife of 59 years, Gladys; his two daughters, Doreen Painter of Sun Prairie and Wendy Painter of Milwaukee; two sons, Rev. Ricky (Karen) Painter of New Berlin and Corey (Amber) Miller-Painter of Sheboygan Falls; five grandchildren, Sasha, Nathaniel, Ellie, Corey Jr., and Lukas; one sister Grace Geiken of Adell; and one brother-in-law, Ronald (Karen) Konrad of Gibbsville.Kenneth was preceded in death by his parents, two sisters, Elizabeth (Jerry) Dirksen and Pauline Larson, and one brother, Charles (Anne) Painter.A funeral service to celebrate Kenneth's life will be held at Noon on Monday, September 28, 2020, at City Church with Rev. Chuck Apple officiating. Entombment will take place at Gardens of Peace Mausoleum in the Town of Sheboygan. Relatives and friends may greet the family at the church from 10 am until the time of the service at Noon. Wearing a facemask and social distance are required. A livestream of the service will be made available at Noon by visiting www.facebook.com/groups/kennethpainter A memorial fund has been established in Kenneth's name for the City Church Building Fund and Sharon S. Richardson Community Hospice.For online condolences and additional information please visit www.wenigfh.com The staff of the Wenig Funeral Home of Sheboygan Falls (920-467-3431) is assisting Kenneth's family with arrangements.

Please click here to view the video tribute
To order memorial trees or send flowers to the family in memory of Kenneth Painter, please visit our flower store.