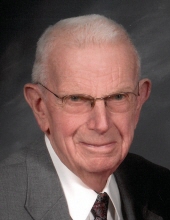 Kenneth Donald Stokdyk, 98, of Oostburg, passed away on Friday, March 8, 2019, at Pine Haven Christian Home- Haven Drive. Kenneth was born on February 24, 1921, in the Town of Holland, to Harvey and Alta (Proctor) Stokdyk. He was a 1939 graduate of Oostburg High School and served in the U.S. Army in WWII in the Chemical Warfare Service from 1943 until 1945. On August 1, 1945, Kenneth married Melanie R. Kolste in Oostburg. Kenneth worked as a commercial fisherman off the shores of Oostburg with his father and brother and later worked at Kool Kitchen Gas Co. as truck driver. For over 20 years, he was also a fixture along the shores of Lake Michigan working "the beat" to attend to local cabins and cottages. He was a member of First Presbyterian Church of Oostburg where he served as a deacon and trustee. Over the years, he was also an active member of the Coast Guard Auxiliary group. He enjoyed bicycle riding, woodworking, yard work, spending time at the lake, and spending time with his family. Kenneth is survived by his daughter, Bonnie (Jay) Hesslink; a son, Kim (Stacy) Stokdyk; three grandchildren, Jan (Rachel) Hesslink, Valerie Hesslink (Mark Hill), and Zachary Stokdyk; and three great-grandchildren, Samantha Gartman, Kyra Hesslink, and Parker Stokdyk. Kenneth was preceded in death by his wife of 71 years, Melanie Stokdyk; and a brother, Leland "Chub" (Joann) Stokdyk; and a brother-in-law, Orville (Gladys) Kolste. A funeral service to celebrate Kenneth's life will be held on Monday, March 11, 2019 at 12:00 pm at the Wenig Funeral Home of Oostburg with Rev. Brian Jacobson officiating. Relatives and friends may greet the family at the funeral home from 10:30 am until the time of service. Burial will take place at Sunrise Memorial Gardens in the Town of Wilson.A memorial fund is being established in his name for Sharon S. Richardson Community Hospice and Pine Haven Christian Communities.The family would like to extend their thanks to the staffs of Sharon S. Richardson Community Hospice- especially Lynn, Rachel, and his weekly bingo partner, Bill Brusse, as well as Pine Haven Christian Communities - especially Pam Simmelink, for their kind and compassionate care over the years. For online condolences and additional information please visit www.wenigfh.com. The Wenig Funeral Home of Oostburg (920-564-2771) is serving the Stokdyk family with arrangements.

To order memorial trees or send flowers to the family in memory of Kenneth Stokdyk, please visit our flower store.