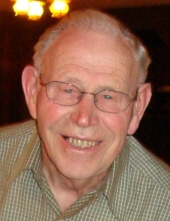 LaMont Glen Jensema, 89, of Oostburg, passed away peacefully on Thursday, November 15, 2018, at Countryside Manor in Sheboygan. LaMont was born on May 6, 1929, in Sheboygan to Henry and Clara (Ten Dolle) Jensema. He was a 1947 graduate of Oostburg High School. LaMont served his country in the United States Army from 1950-1953. On September 20, 1950, LaMont married Marlys Rauwerdink in Gibbsville. She preceded him in death on April 4, 2014.  LaMont was a Mason for a local union until his retirement in 1990. After he retired, he worked as a starter at Blackwolf Run.  Mont was a gentle, giving soul, who was dedicated to his faith, family and church. He was a member of Gibbsville Reformed Church, where he served as an elder, deacon, Sunday School teacher and sang in the church choir. Mont generously gave of his time for his family, he especially loved playing games and watching his children and grandchildren's activities and sporting events. Over the years he enjoyed golfing, bowling and dartball leagues.  He watched and cheered on the Green Bay Packers and Milwaukee Brewers with great enthusiasm.  Mont also enjoyed singing, traveling to almost all 50 states and several countries, camping, gardening, playing cards and games. LaMont will be remembered for his positive outlook on life, his selflessness and his friendship to all who knew him. Mont is survived by his three daughters, Judy (Burt) TenPas of Oostburg, Joan (Linda Peel) Jensema of McHenry, IL and Jill (Mike) Posewitz of Sheboygan; seven grandchildren, Melissa (Jason) Stephen, Jamie (Tanya) TenPas, Kami (Brian) Hagel, Krista Jensema, Jaslyn, Camber and Blake Posewitz; six great-grandchildren, Ashley and Ryan Stephen, Bryce and Nolan TenPas and Mason and Riley Hagel;  two sisters-in-law, Carol Jensema of Oostburg; and Harriet Rauwerdink of Oostburg. He is further survived by many nieces, nephews, cousins, other relatives and friends. Mont was preceded in death by his parents; wife, Marlys; son, Jerry; grandson, Nicholas Jensema; two sisters, Gladys (Ernest) Lammers, and Luella (Trester) Bloemers; three brothers, Ellsworth J. (Marie) Jensema, Donald (Florence) Jensema, and Roland Jensema; and one brother-in-law, Ron Rauwerdink. A funeral service to celebrate Mont's life will be held on Monday, November 19, 2018, at 6pm, at the Wenig Funeral Home in Oostburg, with Rev. Gerry Dykstra officiating.  A private family burial will take place at Sunrise Memorial Gardens in the Town of Wilson. Relatives and friends may greet the family at the funeral home on Monday, November 19, 2018, from 3pm until the time of service at 6pm.  A memorial fund is being established in his name for The Gathering Place (a memory loss day program) and the Alzheimer's Association. The family wishes to extend a heartfelt thank you to the staff and caregivers at Countryside Manor and the Aurora at Home Hospice for their care and compassion they gave to Mont and for the countless friends and family who graciously supported and took time for him especially over the past 4 years.  For online condolences and additional information please visit www.wenigfh.com .  The Wenig Funeral Home of Oostburg (920-564-2771) is serving the Jensema family with arrangements.

To order memorial trees or send flowers to the family in memory of LaMont Jensema, please visit our flower store.