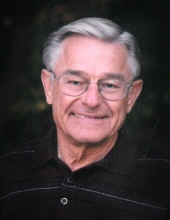 LaMont A. Kaland, 84, of Cedar Grove, passed away on Thursday, April 26, 2018, at St. Nicholas Hospital.LaMont was born on December 2, 1933, in Town of Holland, WI to Lewis and Mildred (Dulmes) Kaland. He was a graduate of Cedar Grove High School and continued his education at Milwaukee School of Engineering. He served in the U.S. Army from 1954 until 1956 during the Korean War at Fort Leonard Wood in Missouri where he served as a cook. On July 29, 1955, LaMont married Audrey Wynveen in Cedar Grove. LaMont was employed at Simplicity, Gilson, and completed his career at Ataco Steel where he served as Vice President of Technical Support for 22 years until his retirement in 2002.He was a former member of Calvary OPC and was most recently a faithful member of Bethel Baptist Church in Sheboygan. He enjoyed wood carving, biking, traveling, reading, fishing, tending to his yard, and attending his grandchildren's activities. He enjoyed annual hunting trips with his friends and family up north in Florence county. LaMont and his wife cherished spending quiet moments together at Lake Michigan.LaMont is survived by his wife, Audrey Kaland of Cedar Grove; two daughters, Susan (Gary) Heidemann of Waterloo, WI, and Sandra (Jeffrey) Sandee of Neenah; son, Jeffrey (Anne) Kaland of Sheboygan Falls; seven grandchildren, Megan Strube, Michael Sandee, Benjamin (Codie) Heidemann, Brian (Leah) Heidemann, Mitchell Kaland, Lucas Kaland, Jenna Kaland; three great-grandchildren, Madelyn Strube, Hailey Strube, Ezra Heidemann; brother, Robert Kaland of Milwaukee; and two brother-in-laws, Ralph Voskuil of Cedar Grove, and Roger (Karen) Wynveen of Cedar Grove. He is further survived by nieces, nephews, other relatives and friends. LaMont was preceded in death by his parents; parents-in-law, Henry and E. Alda (Kappers) Wynveen; and a sister-in-law, Margaret Voskuil.A funeral service to celebrate LaMont's life will be held on Monday, April 30, 2018, at 12:00 pm at the Wenig Funeral Home of Oostburg with Rev. Dan Babbel officiating. A burial will take place at Cedar Grove Cemetery.Relatives and friends may greet the family at the funeral home on Monday from 10:00 am until the time of service at 12:00 pm.In lieu of flowers, a memorial fund is being established in his name for Oostburg Ambulance, Cedar Grove First Responders, and Bethel Baptist Church.The family would like to extend their thanks to the Dr. Steven Bettag, Dr. Kieran Minehan, Mary Lou Roethel APNP, Dr. Michael Brooks, and the staffs of Cedar Grove Gardens and St. Nicholas Hospital for their kind and compassionate care.  For online condolences and additional information please visit www.wenigfh.com. The Wenig Funeral Home of Oostburg (920-564-2771) is serving the Kaland family with arrangements.

To order memorial trees or send flowers to the family in memory of LaMont Kaland, please visit our flower store.