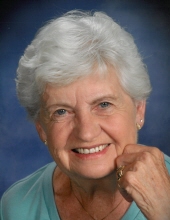 Tears of sorrow are mixed with tears of joy because Laverne Nyenhuis fell asleep safe in the arms of her Lord early Saturday morning, February 8, 2020. She was sustained by God to the point of enjoying a full life of 90 years of age, full of service to others and of the love of her family. Laverne was born on January 9, 1930, in Sheboygan, daughter of John and Lena (Gabrielse) Vander Weele. She attended Sheboygan Christian School and Central High School in Sheboygan. On April 14, 1950 she married Glenn H. Soerens in Sheboygan. Glenn passed away on November 20, 1994 after 44 years of marriage to Laverne. Subsequently, she married Richard Nyenhuis in Oostburg on January 15, 1997. Richard passed away March 31, 2012 after 15 years of marriage to Laverne. Laverne was a devoted wife to her two husbands.Laverne was a member of First Christian Reformed Church in Oostburg, where she was active in the Martha Society. She also volunteered for the Oostburg Christian School Circle. Laverne enjoyed knitting, golf, bowling, travel and playing cards with friends. She participated in three mission trips to Central America.Laverne is survived by her two daughters, Bonnie (Dennis) Huenink of Oostburg and Beth (Jim) Kuiper of Gallup, New Mexico; her four sons, Thomas (Cheryl) Soerens of Oostburg, Dave (Jane) Soerens of Neenah, Michael (Sandy) Soerens of Oostburg, and James (Jessica) Soerens of Hamilton, Michigan. She is also survived by her step-daughter Sherry (Michael) Basch of Sheboygan; 20 grandchildren; two step-grandchildren; 27 great-grandchildren. Laverne is further survived by nieces, nephews, and other relatives and friends.Besides her husbands, Glenn Soerens and Richard Nyenhuis, Laverne was preceded in death by her two sisters, Margaret (John Eggebeen, Andrew Otte) Eggebeen-Otte and Gertrude (Leonard) Gabrielse; four brothers, John (Ginny, Vivian), Lester, Wesley (Char) and Howard (Beatrice) Vander Weele; and great grandson, Carson William Markus.A funeral service to celebrate Laverne's life will be held on Saturday, February 15, 2020, at 11:00 am at First Christian Reformed Church of Oostburg with Rev. Drew Zylstra officiating. A burial will take place at Oostburg Cemetery.Relatives and friends may greet the family at First Christian Reformed Church of Oostburg on Saturday, February 15, 2020 from 9:00 am until the time of service at 11:00 am. A memorial fund is being established in her name for Campus Life.Laverne's family would especially like to thank Dr. Dhillon and the staffs at St. Nicholas Hospital and Sharon S. Richardson Community Hospice for their compassionate care.For online condolences and additional information please visit www.wenigfh.com. The Wenig Funeral Home of Oostburg (920-467-3431) is serving the Nyenhuis family with arrangements.

To order memorial trees or send flowers to the family in memory of Laverne Nyenhuis, please visit our flower store.