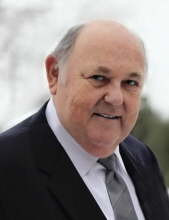 Leon Joseph Kreidler, age 83, went to be with his Lord in the evening of February 16, 2019, surrounded by his loving family at Sharon S. Richardson Community Hospice.Leon was born June 30, 1935, in Stratford, WI, to George and Margaret (Kaiser) Kreidler. His grandparents are Bernard Joseph and Claire (Schiller) Kreidler; Great grandparents are Lorenz and Agatha (Schaefer) Kreidler. He was named Leon from his half sister's husband, Leon "Lee" Laessig.  He moved with his parents and siblings to Plymouth, WI when was four years old.  His dad, George, died when Leon was just 9 years old and he had to help with older siblings to support a family of 10 kids. Later they moved to Sheboygan Falls. Leon graduated from Sheboygan Fall High School in 1955. He enjoyed the high school Rod and Gun club during his high school years and was the class president in his senior year.  His senior yearbook photo stated, "A leader whom friends were proud to follow."On Nov 30, 1963, Leon had married Geraldine Perronne of Sheboygan at Ebenezer United Church of Christ in Sheboygan.  They resided in Sheboygan, raised 5 children, and had just celebrated their 55 years of marriage.From 1961 to 1971, Leon was co-owner of the Fun Spot, a go-kart and mini golf entertainment attraction located on Playbird Road and Hwy 42 Sheboygan.  He worked as a maintenance person at Vinyl Plastic from 1958 to 1967, and at Plastic Engineering as a forklift repair person from 1968 until his retirement in 1998. During retirement, he worked at Clark station, Battery Plus and Pick N Save.   When Leon was not working, his pride and joy was his kids and wife.   He would not think twice to help the kids at a moment notice. We will miss the Sunday pancakes he made for his kids.  He was very talented with his hand and enjoyed repairing many mechanic and electrical projects.   He was very skilled with working with his hands, but his major talent was being a kind and selfless and caring person. He was a person who would give his shirt off his back.   He would always think about helping others before his interests.   He would not think twice in helping his fellow neighbors or his kids with replacing a roof/addition to a house, repairing a car or simple electrical work.  Also, he was proud of his carpentry work on his house and or others friend's home.  When not with family or friends, he enjoyed doing Sudoku and solving varies math problem puzzles.  He received second and first place winner in the 1992 through 1994 Farmer Almanac yearly puzzle contest.  He enjoyed playing sheepshead, watching the Packers play or watching his grandkids soccer game.  He enjoyed talking to his fellow church members over a coffee and donuts.  He also enjoyed getting together with anyone who wanted to talk while having a meal.Leon is survived by his wife and five children, Glenn and Denise (Vogel) Kreidler of Appleton, Jeff and Tammy (O'Keefe) Kreidler of Sheboygan, Cindy Hamann of Sheboygan, Kevin and Kirsten (Denson) Kreidler of Sheboygan, Kay and Justin Strahl of Sheboygan; six grandchildren, Connor Hamann, Kaylee Hamann, Remington Kreidler, Annaleesa Kreidler, Claire Kreidler, Evelyn Kreidler; one sister, Irene Nelson of Sheboygan; two brothers, Albert and Marjorie (Meives) Kreidler of Sheboygan Falls, and Frank and Patricia (McDonell) Kreidler of Plymouth, a brother-in-law, Gene Hasseler of Green Bay.In addition to his parents and grandparents, he was preceded in death by his half-sisters Olive Laessig  and Anita Kreidler (Sister Freda); sister Rita Dickmann, Bernadine Faas, Rosemary Hasseler, Lillian Phillips; a brothers-in-law, LeRoy Dickman, Donald Faas,  Harold Phillips, and David Nelson; half-brother-in-law Leon Laessig; and a grandchild, Tanner Hamann.  Funeral services will be held on Wednesday, February 20, 2019, at 12:30 p.m. at Ebenezer United Church of Christ located at 3215 Saemann Ave in Sheboygan.  A visitation will be held from 10:30 a.m. until the time of service.  Entombment will take place after the service at Greenlawn Memorial Park.A memorial fund has been established in his name for Ebenezer United Church of Christ in Sheboygan.  Leon's family would like to express their heartfelt thanks to doctors Michael, Lyle, Guru and Knabel at Froedtert Cancer Clinic and the Sharon S. Richardson Community Hospice care team for their support and loving care they showed to him.  Leon will be greatly missed by family and friends for his generous and unconditional love. For now, we take comfort in the belief that Leon will be with family and friends in Heaven to continue his generous and unconditional love.For online condolences and more information, please visit www.wenigfh.com Wenig Funeral Homes (920-467-3431) is serving the family with arrangements.

To order memorial trees or send flowers to the family in memory of Leon Kreidler, please visit our flower store.