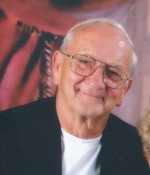 Louis Eugene (Gene) Hastings died peacefully at home in The Villages, FL on Monday March 22, 2021.
He was born November 29, 1934 in Onarga, IL, the son of Jeanette (Michels) Hastings and L. Hastings. He was raised in Onarga by his mother and stepfather Harold Kincade. He held several jobs in his youth: delivering milk bottles & ice (age 8), Onarga Nursery (age 10) and was a bowling alley pinsetter. Later in High school, he delivered ice and coal for his stepfather’s business Kincade Trucking.
After graduating from Onarga High School in 1952, Gene enlisted in the US Navy serving on a refueling tanker during the Korean War. Gene was honorably discharged from the Navy in 1956.
While studying diesel/Automotive Engineering in Chicago, he met and fell in love with the young, beautiful and enchanting Nursing Student Geraldine (Gerrie) Horn. They were married in Sheboygan, WI on June 27, 1959.
He found employment at the Kohler company, near Gerrie’s hometown. He spent his entire career (37 years) at Kohler Company, retiring in 1995.

Gene and Gerrie moved to Lac du Flambeau enjoying retirement at their lake home on the shores of Pokegama Lake. They were avid “pontooners” spending many days on the water. Winters were spent at The Villages where they later became full time residents and loved life in The Villages.
He enjoyed vintage cars. While in Chicago he modified a 1950 Hudson Hornet and raced around Chicago area tracks. Later in life he purchased and restored a 1965 Mustang convertible.

Gene was an avid outdoorsman. He loved deer hunting with both bow and firearm. As a competitive archer, he won multiple state championship titles. He also had a passion for traveling. The couple traveled to all 50 states and many foreign countries: Europe, Australia, New Zealand, China and many “Ports of call” while cruising.

Gene is survived by Gerrie, his loving wife of 61 years. He is also survived by: his daughters Debbie Hastings-La Croix and Theresa (Steve) Grams; Grandchildren Nicholas La Croix, Brooke and Hunter Grams. He is further survived by his brother Butch Kincade and many nieces and nephews.

Preceding him in death are: his parents and stepfather; his mother and father in-law Verona (Pfister) Horn and Oscar Horn; his sisters Gerrie Price and Mardell (Bill) Maltman, son in-law Michael La Croix.

All are welcome to join via livestream by visiting wenig.live/GeneHastings .

To order memorial trees or send flowers to the family in memory of Louis Eugene "Gene" Hastings, please visit our flower store.