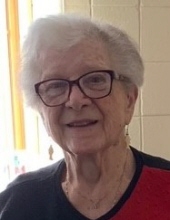 Margarete E. Blake, formerly of Sheboygan and Florida, died Monday morning, January 18, 2021 at Pine Haven Christian Home. She was 93 years old. Margarete was born April 25, 1927 in Frankfurt, Germany. She was the daughter of Adolf and Lena (nee Anton) Barth. She was raised in Frankfurt, and on August 11, 1948 she was united in marriage with Raymond A. Blake. Shortly after their marriage, the couple moved back to Raymond's hometown of Sheboygan. On November 12, 1952, Margie proudly became a naturalized citizen of the United States of America. Raymond preceded her in death in 1972.  Margie worked at the Sheboygan County Courthouse and the H.C. Prange Company in Sheboygan.  In 1977 she moved to Milwaukee and began work at Allis Chalmers Power Systems Incorporated (ACPSI) as an administrative assistant.  She then moved onto their System and Dynamics Performance Team where she would remain for the rest of her career.  When ACPSI became Utility Power Corporation, Margie relocated to Bradenton Florida to continue to support the Performance Team.  She continued in this role when Utility Power Corporation became Siemens Power Corporation (SPC).  Her work for Siemens included a stint in the field at the Grand Gulf Nuclear Station.  When SPC relocated back to Milwaukee Margie chose to retire to stay in Bradenton but continued working for SPC on a freelance basis.  In retirement she also worked part time at Edward Jones in Bradenton Florida. A devout Lutheran with a strong faith throughout her life. Margie was a former member of St. Paul Lutheran Church in Sheboygan and Hope Lutheran Church in Bradenton, FL. An active and adventurous person, Margie enjoyed swimming, biking, golfing and traveling, including trips to the Holy Land, Turkey, Greece and many trips to her home country, Germany. A lifelong linguist, Margie proudly spoke German, English and French.  Margie is survived by a son, Steve (the late Barbara) Blake of Sheboygan Falls and a daughter, Maryann Clark, currently residing in Bradenton Florida.  She is further survived by a grandson, Matthew A. (Samantha) Blake of Milwaukee, brother Hans (Edith) Barth of Green Bay, niece Annette, nephew Jeffery, former daughter-in-law Emma (Phil) Mersberger, other relatives and friends.  In addition to her husband, she is preceded in death by a brother, Karl Heinz Barth and a granddaughter, Amanda McGettrick. The family will receive visitors on Wednesday, January 27, 2021 from 10:30-11:30AM at Wenig Funeral Home, 711 Broadway in Sheboygan Falls. A private family service will follow. She will be laid to rest at Greenlawn Memorial Park beside Raymond. In lieu of flowers, a memorial fund is being established in her name.  The Wenig Funeral Home - Sheboygan Falls (920-467-3431) is serving the family. Please visit www.wenigfh.com to leave online condolences.

To order memorial trees or send flowers to the family in memory of Margarete Blake, please visit our flower store.