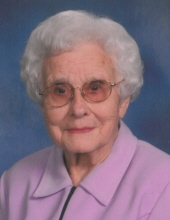 Marie B. Jensema, 98, Oostburg, went to be with her Lord and Savior on Saturday, February 17, 2018 at Cedar Grove Gardens.Marie was born on December 31, 1919 in the Town of Sherman to Peter and Berendena (Mentink) Wisse. She attended Wisconsin Memorial Academy. On August 30, 1940 she married Ellsworth Jensema in Hingham. He preceded her in death on July 2, 1990. Marie dedicated herself to taking care of and raising their children. After the children were grown she worked part time for a few years at Dutchland Plastics.Marie was a member of First Reformed Church in Oostburg, where she was involved in the Young at Heart and Mission Circle. She was also involved with Senior Citizens of Oostburg. Marie enjoyed gardening, cooking, baking, especially making sugar specs, playing cards and spending time with her family.Marie is survived by three daughters, Shirley (Ron) Meinen of Cedar Grove, Nancy (Ron) Westerbeke of Oostburg and Ruth (Ken) Arentsen of Hingham; one son, David (Karla) Jensema of Oostburg; nine grandchildren, Laurie (Jay) Huibregtse, Danette (Todd) Hoftiezer, Nicole (Paul) Mentink, Peter Westerbeke, Andrew, Eric (Andrea), and Seth (Kelly) Arentsen, Tara and Britta Jensema; 16 great grandchildren; two great-great grandchildren; and two sisters-in-law, Arline Wisse and Carol Jensema and one brother-in-law, LaMont Jensema.  She is further survived by nieces, nephews, other relatives and friends.Marie was preceded in death by her parents; her husband, Ellsworth; brother, John Wisse; an infant brother; her parents-in-law, Henry and Clara Jensema; and brothers-in-law and sisters-in-law.A funeral service to celebrate Marie's life will be held on Thursday, February 22, 2018 at 6pm at the First Reformed Church in Oostburg, with Rev. Bob Rook officiating. A family burial will be held on Friday, February 23, 2018 at Gibbsville Cemetery.Relatives and friends may greet the family on Thursday, February 22, 2018 at the First Reformed Church in Oostburg from 3pm until the time of service at 6pm.A memorial fund is being established in Marie's name for First Reformed Church of Oostburg.For online condolences and additional information please visit www.wenigfh.com The staff of the Wenig Funeral Home of Oostburg (920-564-2771) is assisting Marie's family with arrangements.

To order memorial trees or send flowers to the family in memory of Marie Jensema, please visit our flower store.