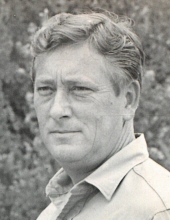 Mark Wesley Voskuil, 92, of Cedar Grove, passed away on Friday, February 1, 2019, at Cedar Grove Gardens. Mark was born on May 12, 1926, in Cedar Grove, to H. John and Jennie (Lensink) Voskuil. He was a 1944 graduate of Cedar Grove High School. Mark served his country in the United States Navy, from 1944-1946, during World War II. On June 24, 1950, Mark married Joyce Sheridan in Milwaukee. Mark was a Park Superintendent for Peninsula State Park for four years and then returned back home and was the Park Superintendent for Harrington Beach State Park until his retirement in 1987. Mark was a member of Calvary Orthodox Presbyterian Church in Cedar Grove, where he served as a trustee and was a part of the Men's Society. Mark enjoyed traveling, golfing, hunting, fishing, wood refinishing, automobiles and riding his moped. His family was his pride and joy and he treasured the time they spent together.  Mark is survived by his wife of 68years, Joyce; daughter, Lori (Jeff) Dutter; son, David (Helle) Voskuil; five grandchildren, Dustin Dutter, Molly (Adel) Ansari, Bryan (LeighAnn) Voskuil, Abby (Connor) Fuchs and Alan Voskuil; and five great-granddaughters, Laya Ansari, Charly Dutter, Stella and Claire Marie Voskuil and Kensley Voskuil.   Mark was preceded in death by his parents; sister, Josephine (John) Ellarson; two brothers, Homer (Dorothy) Voskuil, and Cap (Mary) Voskuil; parents-in-law, Clair and Julia Sheridan; and brother-in-law, Galen Sheridan.  A funeral service to celebrate Mark's life will be held on Friday, February 15, 2019, at 1pm at Calvary OPC in Cedar Grove with Rev. David Cornette officiating. An inurnment will take place at Presbyterian Cemetery in Cedar Grove. Relatives and friends may greet the family at the church on Friday, February 15, 2019, from 11 am until the time of service at 1 pm.  A memorial fund is being established in his name for St. Nicholas Hospice. For online condolences and additional information please visit www.wenigfh.com The Wenig Funeral Home of Oostburg (920-564-2771) is serving the Voskuil family with arrangements.

To order memorial trees or send flowers to the family in memory of Mark Voskuil, please visit our flower store.