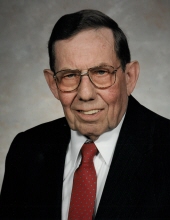 Merlin "Butch" Nowack, 90, passed away peacefully on October 20, 2018, at Gables on the Pond in Random Lake. Butch was born in Random Lake on December 5, 1927, the son of Alvin and Edna Donath Nowack. He attended Random Lake Public Grade School and graduated from Random Lake High School in 1945, and then served from 1946-1947 in the U.S. Coast Guard. On September 2, 1950, he married Elizabeth "Betty" Palmer in Random Lake, who had moved from Milwaukee in 1946. She preceded him in death in January 2000.Butch worked for A.J. Wilk, Inc., a farm implement and later a Buick dealership, after his service with the Coast Guard until 1974 when he started work as a fleet mechanic for Wisconsin Electric until his retirement in 1988. After retirement, he volunteered for several years as a weed cutter on Random Lake and drove for several auto dealerships for dealer trades locally, and in the surrounding states. Butch had a passion for gardening and flowers, especially his African Violets. He supplied produce for his family, friends, and neighbors and took the surplus vegetables to the local food pantry. He also enjoyed bowling and golf. He was an avid bowler in a men's league at Globe Lanes for many years. After starting work at Wisconsin Electric he enjoyed playing golf as he now could do that during the day with his new work schedule and he did that for 30 years. Butch could fix almost anything and for many years after he worked at Wilk Buick, people would bring cars to his house to have him look at them because they trusted him before anyone else. Butch served on the Random Lake Village Board for many years and was Village President from 1969 - 1974. He also was a volunteer firefighter for the Random Lake Fire Department for many years He and Betty were very active in the community serving on the Random Lake United Fund, and working to start the Lakeview Community Library. Butch was also very involved in the startup of the Random Lake Historical Society and was an Honorary Board Member. He is the great-grandson of Carl Nowack, who had the first log cabin in Random Lake, which now is on Short Street. He lived in that cabin and the addition that Carl Nowack added to it for many years. That cabin is now listed as a Wisconsin Historical Site. Butch is survived by four children, James (Mary) Nowack of Cleveland, TN, Nancy Streff of Fredonia, Carol (Richard) Krause of Elk Grove Village, IL, and Daniel (Tina) Nowack of Hingham. He had five grandchildren: Scott Streff, Tim Streff, Sandy (Jesse) Norwood, Jessica (Jeff) Schmidt, and Samantha Schroeder, step-grandchildren: Jeff, Connie, Michelle, Larry, Hayley, and Angelica; six great-grandchildren; Kayla, Savannah, Mason, Ashton, Jonah, Serenity, and Owen, twelve step great-grandchildren, cousins, nieces, and nephews.Also survived by his brother and sister-law, Donald and Alicia Nowack of Nekoosa, WI, sisters-in-law Norma (Bob) Palmer of Vicksburg, MI and Linda (Bruce) Palmer of Griswold, IA, and brother-in-law and sister-in-law Bill and Pat Palmer of Random Lake. Besides his wife, he was preceded in death by his parents, infant son David, son-in-law Jerry (Nancy) Streff, sister Lois Miller; brothers-in-law Lawrence (Lois) Miller, Bruce Palmer, Bob Palmer: sisters-in-law Barb Palmer, and Bev (Bob) Deppiesse.A memorial service celebrating his life will be held at Wenig Funeral Home in Oostburg on Saturday, October 27, 2018 at 12 pm. A visitation will be held at the funeral home from 10 am until the time of service at 12 pm. He will be buried next to his wife in St. Mary's Cemetery in Random Lake. Butch's family would like to extend their appreciation to the staff of Gables on the Pond, with special thanks to Carrie and Sam, for their compassionate care.A memorial fund is being established in his name for Random Lake Area Historical Society. For online condolences and additional information please visit www.wenigfh.com. The Wenig Funeral Home of Oostburg (920-467-3431) is serving the Nowack family with arrangements.

To order memorial trees or send flowers to the family in memory of Merlin Nowack, please visit our flower store.