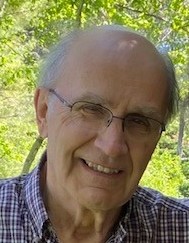 Michael J. DuMez went to his eternal home on Friday morning, February 4, 2022, surrounded by his loving family singing hymns of praise.  He was 76 years old.

Michael was born December 22, 1945, in Sheboygan, Wisconsin, the son of Bernard and Beatrice (nee Dirkse) DuMez. He attended Oostburg Christian School and graduated from Oostburg High School in 1964. He went on to study at Dordt College (University) and UW Stevens Point, earning his Masters Degree in Environmental Stewardship.

In Sheboygan, On September 2, 1967, Michael was united in marriage with Jean Theune.

Michael was an active member of First Christian Reformed Church in Oostburg. He enjoyed natural landscaping, volunteering, camping, traveling, and coaching.  He will be remembered as thoughtful, witty, and always ready for a conversation.  Above all, he was a loving and faithful husband and father, and an insightful and attentive Grandpa.

A Memorial Service celebrating God's work in Michael’s life will be held at 5:30 p.m. on Thursday, June 30, 2022, at First Christian Reformed Church in Oostburg.

To order memorial trees or send flowers to the family in memory of Michael DuMez, please visit our flower store.