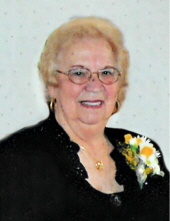 Muriel C. "Blondie" Sadro, 92, of Sheboygan Falls, died early Sunday morning, August 18, 2019, at Pine Haven Christian Home.Blondie was born on December 16, 1926, in Plymouth, the daughter of Charles and Meta (Bohnsack) Schuette. She attended Victor School and graduated from Plymouth High School in 1944.  She met her future husband, Roy on a blind date and attended a birthday party in Silver Creek. On October 29, 1955, she married Roy V. Sadro in Plymouth.  He preceded her in death on December 6, 2013, following 57 years of marriage. Blondie was a member of St. Paul Lutheran Church in Sheboygan Falls where she volunteered with the Trash and Treasure project. Blondie always loved to cook. She and a friend ran a catering business for weddings. She also greatly enjoyed working for the Sheboygan Area School District as a cook for the overnight camping trip that children used to take. She worked at Borden Cheese Co. for about five years and at a biscuit factory.  She enjoyed dancing, sewing, music and EWSCA racing. Her son, Gary, raced stock cars in Plymouth and at one time Blondie even took part in a powder puff race herself. She and her husband enjoyed traveling to many states including California, Texas, Tennessee, Georgia and Florida.Blondie is survived by two sons, Scott (Rita) Sadro and Gary Sadro, both of Sheboygan Falls; two grandchildren, Dan Sadro, Nikki (Matt) Stenson; and three great-grandchildren, Micah, Elias, and Asher Stenson. Blondie was preceded in death by her husband, a daughter-in-law, Barbara Sadro; and two sisters, Marie Schuette and Delores (Fred) Hoenke.A funeral to celebrate Blondie's life will be held at the Wenig Funeral Home in Sheboygan Falls on Wednesday, August 21, 2019, at 6 pm with the Rev. Tom Gudmundson officiating. Entombment will take place at the Gardens of Peace Mausoleum in the Town of Sheboygan.Family and friends will gather at the Wenig Funeral Home on Wednesday from 4:30 pm from until the time of the service at 6 pm.For online condolences and additional information please visit www.wenigfh.com A memorial fund is being established in her memory for St. Paul Lutheran Church.The staff of the Wenig Funeral Home (920-467-3431) is serving the Sadro family.

To order memorial trees or send flowers to the family in memory of Muriel Sadro, please visit our flower store.