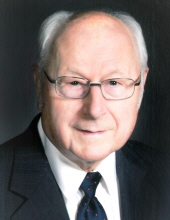 Norbert J. Kabat, 93, formerly of New Holstein, was born to eternal life on Sunday morning, January 14, 2018 while at Libby's House in Chilton where he had resided for the past year.Norb was born on June 3,1924 in Brillion, the son of John E. and Mary "Marie" (Nenahlo) Kabat. He was a 1943 graduate of Valders High School. On August 30,1947, he married Gladys V. Groh in St. Nazianz. Gladys preceded him in death on June 16, 1972. On June 25,1974, he married Gertrude (Juckem) Wenig in New Holstein. Early in his life, Norb farmed for a short time before becoming a technician for the Badger Breeder Cooperative from 1951 until 1961. He later worked as Superintendent of Postal Services for the US Postal Service in New Holstein for 23 years before his retirement in 1984.Norb was a longtime and faithful member of Holy Rosary Catholic Church in New Holstein where he served in the Holy Name Society and sang with the church choir. Norb was recipient of the St. Vincent DePaul Ozanan Award for his distinguished service. He and his wife made many new friends while volunteering at the Salvatorian Missions. Norb enjoyed yardwork, playing cards, dancing, traveling, collecting stamps, fishing, and spending time with his family.Norb is survived by his wife, Gertrude of Chilton; six daughters, Mary (Steve) Dorn of Appleton; Pat (Dave) Bowser of Wautoma; Vicki (Rob) Szklarz of Mequon; Ann (Randy) Lisowe of Chilton; Shirley (Sid) Dyer of Greenwood, IN; Donna (Bill) Rowell of Crown Point, IN; seven sons, Michael (Shirley) Kabat of Darboy; Dennis (Joan) Kabat of New Holstein; James Wenig of Chilton, John (Barbara) Wenig of Sheboygan Falls; Ed (Debbie) Wenig of Chilton; Michael (friend Barbara Wimmer) Wenig of Indianapolis, IN; Paul (Joyce) Wenig of Delafield; 30 grandchildren; 25 great grandchildren. He is also survived by one brother, Arnold Kabat of Manitowoc; four sisters-in-law, Lorraine Kabat of Manitowoc, LaVerne Kabat of Fond du lac, Marge Schwoerer of Sheboygan, Bernetta Wenig of Chilton; two brothers-in-law, Joseph Juckem of Chilton and Francis (Agnes) Wenig of Elmhurst, IL. Norb is further survived by many special nieces, nephews, other relatives and friends.Norb was preceded in death by his first wife, Gladys; his parents, John and Marie Kabat; parents-in-law, Andrew and Emily Groh, Peter and Margaret Juckem; a grandson, Andrew Wenig; two brothers, Eugene and John Kabat; and one sister-in-law, Alice Kabat.To celebrate Norb's earthly and eternal life, a Mass of Christian Burial will take place at Holy Rosary Catholic Church located at 1800 Madison St., New Holstein at 11am, on Saturday, January 20, 2018. A burial will take place at Holy Rosary Catholic Cemetery in New Holstein.Family and friends may greet the family at the Sippel Funeral Home located at 2618 Altona Ave, New Holstein from 4pm to 7pm on Friday; and again on Saturday, at church, from 9:30 am until the time of the Mass at 11 am.For more information and online condolences please visit www.wenigfh.comA memorial fund is being established in his memory for the Society of St. Vincent DePaul and the Salvatorian Missions.The Kabat-Wenig families would like to express their appreciation to the staffs of Libby's House in Chilton and Heartland Hospice for the care provided to Norb during the past year.The staffs of the Wenig Funeral Homes of Sheboygan Falls (920-467-3431) and the Sippel Funeral Home of New Holstein (920-898-4300) are serving the family.

Please click here to view the video tribute
To order memorial trees or send flowers to the family in memory of Norbert Kabat, please visit our flower store.