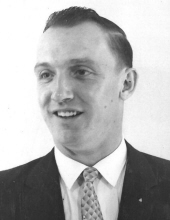 Norbert "Norb" A. Wagner Meyer, 82, of Sheboygan Falls, passed away peacefully on Sunday, August 12, 2018, at Pine Haven Christian Home, surrounded by family.Norb was born on September 15, 1935, in Cleveland, WI, son of William Wagner and Loretta Meyer. He was a graduate of Slinger High School.  Norb met his lovely wife, Sharlene Woodworth, at a polka dance in 1958.  They married on September 19, 1959.  Norb served with the US Army in the Korean Conflict.  He was employed as a truck driver with various companies and was a union member in good standing with the Teamsters Union Local 200.  After retiring in the early 90's, he worked part-time at Neuman Plumbing and Rick's House of Flowers.  Norb also volunteered his time with Meals on Wheels and St. Nicholas Hospital.Norb was a member of Saron United Church of Christ in Sheboygan Falls, where he ushered for many years.  He was a lifetime member of Cassia Masonic Lodge 167 and the Order of the Eastern Star.  Norb was very proud of his military service and was actively involved in the VFW, American Legion, and the Korean War Vets.  He was a police officer in the Village of Butler, WI.  Norb and his wife enjoyed going to polka dances, he enjoyed photography, old time music, and traveling.  He was especially proud of his grandchildren and their many accomplishments in milestones.Norb is survived by wife of 58 years, Sharlene; his four sons, Jeff (Karen) Meyer of Hartford, Randy (Cherie) Meyer of Mauston, Michael (Judy) Meyer of West Bend, and Karl (Cheryl) Meyer of Fond du Lac; four granddaughters, Randa (Christopher Michael Daely) Meyer, and Serena, Holly, and Amy Meyer; two step-grandchildren, Angela (Timothy) DeToni and Andrew Otis; and two step-great-grandchildren, Landon and Gemma DeToni; and many dear friends.Norb was preceded in death by his parents, and infant daughter, Monika Joan, three brothers, Norman (Alice) Wagner, George Wagner, and Harvey Wagner, and one sister, Dorothy (Harold) Mayer.A funeral service to celebrate Norb's life will be held at 1:00 pm on Thursday, August 16, 2018, at Saron UCC in the Town of Sheboygan Falls with Rev. Deb Tyler officiating.  Burial and military honors will take place at Sheboygan Falls Cemetery.Relatives and friends may gather at the church on Thursday from 11:00 am until the time of the service at 1:00 pm.A memorial fund has been established in Norb's name for the Sheboygan County Humane Society, the American Heart Association, and the Alzheimer's Association.The family would like to thank the staff of Pine Haven Christian Home for the compassionate care given to Norb.For online condolences and additional information please visit www.wenigfh.com The staff of the Wenig Funeral Home of Sheboygan Falls (920-467-3431) is assisting Norb's family with arrangements.

To order memorial trees or send flowers to the family in memory of Norbert Meyer, please visit our flower store.