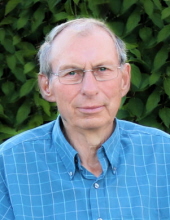 Norman A. Parrish, 79, of Oostburg went home to his Lord on July 11, 2019 while at the Sharon S. Richardson Community Hospice with family members at his side.Norman was born in Plymouth, WI on March 16, 1940, the son of the late Sheldon and Marie (VanderPloeg) Parrish. He attended Bonnie View School, a one-room school, graduated 8th grade the only one in his class. He graduated from Plymouth High School in 1958. He was a member of the FFA and went on to graduate from the farm short course at UW-Madison and worked on various farms in high school and after. He was employed at Richardson Industries when he was drafted into the US Army and then served in the US Army from 1963-65 where he served as an MP at Fort Belvor, VA. In 1966 he began employment at Kohler Co. in the maintenance department where he fixed things everywhere in the plant. He became a member of the Kohler Quarter Century Club in 1991 and retired from there in 2004 after working for Kohler Co. for 37 years. In October 2018, he made his final rounds of the Kohler Co. on a tour with one of his sons. On September 26, 1970, he married Phyllis DeRuyter in Cedar Grove. They settled in Oostburg and lived there since. Norman was a very handy man and helped to build the home he lived in. He completed many woodworking projects for the family. He enjoyed the outdoors bicycling and walking every day he could. Norman was a member of the First Reformed Church in Oostburg and was a participant of the Young at Heart group. He was also a member of the Kohler Quarter Century Club, delivered Meals on Wheels, was a volunteer at Campus Life for many years. He enjoyed woodworking, birdwatching, walking, bicycling, bowling, gardening and word puzzles. Many memories surround their annual family vacations together while raising his family.Norman is survived by his wife of 48 years, Phyllis of Oostburg; three sons, Kevin (Julie) Parrish of Oostburg, Rev. David (Amy) Parrish of Papillion, NE, and Dan (Mandie) Parrish of Oostburg; nine grandchildren, Anna, Nathan, Joseph, Sarah Parrish, Ella, Gabriel and Clara Parrish, Malachi and Elaina Parrish; three sisters, Carol (Ronald) Lemke of Winder, GA, Marilyn (Howard) Heiden of Plymouth, Jane (Ronald) Hayek of Waukesha; one brother, Rev. Glenn (Dianne) Parrish of Monticello, GA; three sisters-in-law, Althea (Allan) VerVelde of Oostburg, Edith Beernink of Cedar Grove, and Audrey Jacoby of Random Lake; and two brothers-in-law, Mark DeRuyter of Cedar Grove and Ralph (Linda) DeRuyter of Berlin. Norman is also survived by nieces, nephews, and cousins.He was preceded in death by his parents, two brothers-in-law, Allan DeRuyter and Ivan Beernink; and one sister-in-law, Carol M. DeRuyter.A memorial service to celebrate Norman's life will take place at the First Reformed Church in Oostburg at 11 am on Thursday, July 18, 2019. Relatives and friends may greet the family at the Wenig Funeral Home in Oostburg on Wednesday, July 17, 2019, from 4 pm until 7 pm, and again at church, on Thursday, July 18, 2019, from 10 am until the time of the service at 11 am.A memorial fund is being established in his memory for the Sharon S. Richardson Community Hospice and Campus Life.The family wishes to thank the dedicated staff at the Sharon S. Richardson Community Hospice Center for the loving care given to Norman and their family. The family would also like to thank the staff at Countryside Manor for his excellent care there during his short stay there.While his mind dimmed, his active life faded away. Norman now rests in eternal peace.For online condolences and additional information please visit www.wenigfh.com The staff of the Wenig Funeral Homes (920-564-2771) is serving the Parrish family.

To order memorial trees or send flowers to the family in memory of Norman Parrish, please visit our flower store.