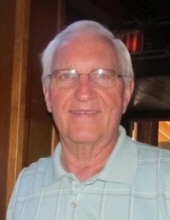 Norman (Norm) J. Worm, age 85, of Sheboygan Falls, born June 10, 1933, to Alfred and Irene Worm, in New London, Wisconsin, passed away peacefully at home on July 6, 2018, after a hard-fought battle with pulmonary fibrosis.  At age 10 and after the early death of his father, Norm moved with his mother to Sheboygan to be closer to his older brother, Bob, and his wife Elaine.    He met the love of his life, Diane Schneidewind, in 1952 while attending Central High School. On June 26, 1954, they were united in marriage at Immanuel Lutheran Church, Sheboygan. A man of quiet faith, he was confirmed at Immanuel Lutheran Church, Sheboygan, and has been a member of St. Paul's Lutheran Church, Sheboygan Falls for over 50 years.June 2018 was a special month for Norm, as his last goal was to reach his 85th birthday and celebrate 64 years of marriage with Diane, his best friend. The celebrations were just what he wanted and his happiness shined through the smile on his face.Starting at the age of 16, Norm began his life-long career with Fasse Paint Co., Sheboygan Falls.  The favorite part of his career was decorating and he took great pride in the projects he completed at both the old and new church buildings for St. Paul's.  Always a dedicated and trusted friend and employee, Norm celebrated his retirement on June 10, 1995.An avid sports fan, Norm enjoyed his Packers, his Brewers, and was a lover of Wisconsin Badger football and basketball.  He also loved to hunt and fish in northern Wisconsin and could be found on Lake Winnebago ice fishing, with his daughter, Colleen, ice skating alongside him.  Norm loved traveling with Diane on their trips to Switzerland, Hawaii, Alaska and other parts of the country. He cherished all the times spent together with his children and grandchildren, especially playing cards, casino trips with Diane and their daughters, and celebrating family milestones, holidays and the annual "Worm Round Robin." His grandchildren loved his sense of humor and he taught them a whole new vocabulary and a love for life!  Norm will be greatly missed by his entire family and is survived by his loving and devoted wife, Diane, his daughters and their families, Colleen (Bob) Reineking of Sheboygan Falls, and their children, Amy Reineking of Wauwatosa, and Brian (Abby) Reineking, of Sheboygan Falls; Donna (Rick) Mulder, of Sheboygan Falls, and their children, Lauren (Lucas) Baumann of South Milwaukee, and Evan Mulder, of Cottage Grove, MN, and his fiance' Hannah Van Der Weele of Manitowoc; as well as his son-in-law, Jim Van De Vreugde of Livermore, CA, and his children Erik (Sara) Van De Vreugde of Spring TX, and Kristen Van De Vreugde of Livermore, CA; his precious great grandsons, Tayte and Layken Reineking, and a sister, Arlene Rowinski of Verplank, NY.  He is further survived by his loving nieces and nephews, and numerous friends.Besides his parents and in-laws, Harvey and Della Schneidewind, he was preceded in death by his daughter, Debra Van De Vreugde, his brother and "sister"-in-law, Robert and Elaine Worm, his sister and brother-in-law, Esther and Joe Bagnera, and brother-in-law, Bernard Rowinski.A funeral service to celebrate Norm's life will be held on Wednesday, July 11, 2018 at 5pm at St. Paul Lutheran Church in Sheboygan Falls with Rev. Tom Gudmundson officiating. Burial will be at Sheboygan Falls Cemetery.Relatives and friends may greet the family at the church on Wednesday, July 11, 2018 from 3pm until the time of service at 5pm.Memorial gifts in Norm's name can be made to St. Paul's Lutheran Church and Sharon S. Richardson Community Hospice, both of Sheboygan Falls.Norm's family would like to thank the wonderful nurses and staff of the Sharon S. Richardson Community Hospice for their in-home care and support over the last few weeks, as well as Pastor Tom Gudmundson for his compassion and words of comfort during his home visits.When someone you love becomes a memory, the memory becomes a treasure.

To order memorial trees or send flowers to the family in memory of Norman Worm, please visit our flower store.