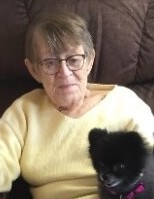 Patti was born March 21, 1942 in Sheboygan, the daughter of Bernard and Ruth (nee Wagner) Majerus. She graduated from Sheboygan Falls High School in 1960, and went on to work as a grocery merchandiser for over 20 years, retiring in 2004. Previously, she had worked for Johnsonville Foods for 13 years.

On June 10, 1961 she was united in marriage with Donald Brethouwer in Sheboygan, and they had one son and one daughter.

Patti belonged to Grace UCC in Kohler, and was a member of the Sheboygan County Knitting and Crochet Club, Tats’ Us (a 10- year club) and volunteered at Bethesda, the Gathering Place, the Sheboygan County Museum and Sharon S. Richardson Community Hospice. Over the years, she had enjoyed making blankets for Project Angel Hugs, hats for newborn babies at Aurora Sheboygan Memorial Hospital, tatting flowers for the Gathering Place to create greeting cards and helping nursing home residents create sleeping mats for the homeless out of plastic bags.  She loved knitting, crocheting, tatting, vacationing in Pickerel Lake, and time spent with friends.

She is survived by her siblings: Janis Wachter of MN and David Majerus of Sheboygan; sister-in-law Barbara Majerus of MN; cousin Faye Hermanns and dear friends Diane Fiedler, Wendy Young and Ruth Willadsen. She is further survived by 2 children, 3 grandchildren including Liam and Alia, nieces, nephews, other relatives and friends.

She is preceded in death by her parents, an infant son, brother Dale Majeras, and former husband Donald.

A Memorial Service will be held at 1:00PM on Friday, January 21, 2022 at Wenig Funeral Home, 711 Broadway in Sheboygan Falls. A visitation will be held on Friday at the funeral home from 12:00 noon – 1:00PM. All are welcome to view a livestream of the funeral on Patti’s obituary page at www.wenigfh.com .

In lieu of flowers, memorials are suggested to The Gathering Place or Grace UCC.

A special thank you to all those who helped care for Patti, especially Roseann and Donald Koenigs, David and Terry Scherer, Aurora Sheboygan Memorial Hospital 4th floor nursing staff, the Aurora Hospice Team, and to Liz for taking Becky, Patti’s little forever doggy.

The Wenig Funeral Home – Sheboygan Falls is assisting the family with arrangements. Please visit www.wenigfh.com for more information or to leave online condolences.

To order memorial trees or send flowers to the family in memory of Patricia "Patti" Brethouwer, please visit our flower store.