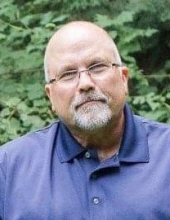 "Whatever you do, work heartily, as for the Lord and not for men, knowing that from the Lord you will receive the inheritance as your reward. You are serving the Lord Christ." Colossians 3:23-24Perry William Hoitink, of Oostburg, was born into eternal life on February 8, 2021 in a traffic accident while working as a milk truck driver (a job he loved). Perry was born to Lloyd and Delores (Veldman) Hoitink on April 5, 1960 in Sheboygan, Wisconsin. He grew up in Hingham, a place of fond memories for him where he played on the Mill Pond, Onion River and roller skated at Hingham Hall. He graduated in 1978 from Oostburg High School. He was later united in marriage with his high school sweetheart, Cindy (Navis) Hoitink on April 19, 1980. Together, they built a beautiful life and modeled their love for Christ by loving and serving their children, grandchildren, and all those around them.Perry served on the Sheboygan County Highway Department for 37 years, and most recently enjoyed the transition from part-time to full-time driving milk trucks for Joosse Trucking in his retirement. Perry was also a long-time member of the First Reformed Church of Oostburg where he served as youth leader for RCYF, deacon, pastoral care elder, and behind-the-scenes on the video crew. Perry also enjoyed the outdoors where you could find him fishing Wisconsin lakes, caring for his backyard birds, camping in their "Fun Finder," and traveling to favorite destinations like The Grand Canyon and Door County (while enjoying "the trifecta" for the perfect food day: a warm fritter from City Bakery, cherry-stuffed french toast from The White Gull Inn, and lemon cookie gelato from The Door County Creamery).Many things gave him joy in life, but above all else, Perry most valued caring for his family in his hands-on role as husband, dad, and Opa.  It was not uncommon to find Perry on his hands and knees spending quality time with his beloved grandkids who affectionately called him "Opie." He was the instigator of all shenanigans at countless Sunday dinners by Grams & Gramps. He always liked to be "in the know" when anyone snuck a piece of candy from the candy jar. Perry also stayed busy working his magic by crafting thoughtful gifts and completing projects alongside his family. He helped out his kids when there was any handiwork to be done -- always finding a solution with his incomparable MacGyver skills. He loved by doing and he passed this trait on to those he loved most. Perry will be remembered for his quiet, controlled strength that steadily held up his family and it is his model that will lead them through this season of loss. "The Lord is near to the brokenhearted and saves those crushed in spirit."  These words of the psalmist encourage us to hold fast to Hope even in our deepest grief. Perry is survived by Cindy, his wife of 40 years; his children: Jessica Hoitink, Jennifer (Eric) Hahn, Jarred (Amanda) Hoitink; bonus son: Earlson Newell; his grandchildren: Jayleigh Hoskins, Deacon Hahn, Vander Hahn, Amaya Hahn, and Lillian Hoitink; his father-in-law & mother-in-law: Wayne & Alice Navis; his sisters: Joyce (Allen) Kuhlow & Luann (Glenn) Harmelink; his sisters-in-law: Tammy (Bill) Peiffer & Sylvia Hoitink; his brothers-in-law: Rick (Renee) Navis, Corey (Tamara) Navis, David (Brenda) Navis; and nieces & nephews: Jon (Fehmida) Kuhlow, Chad (Kristen) Hoitink, Paula (Louie) Gentine, Sara (Daniel) Infusino, David Hesselink, Tanner (Jordan) Peiffer, Dalton Peiffer, Grayson Peiffer, Chloe (Massimo) Biella, Lindsey Navis, Maggie Navis, Brittney Walsh, Ally Walsh.Perry was preceded in death by his parents: Lloyd & Delores Hoitink; a brother, Paul Hoitink; nieces & nephew: Heidi Harmelink, Terrill Harmelink, Stephanie Kuhlow, Rylee Peiffer, Landon Peiffer, and grandchildren: Baby Hahn & Baby Hoitink. A funeral service to celebrate Perry's life will take place at the First Reformed Church of Oostburg on Sunday, February 14 at 5:00 pm with Rev. Bob Rook and Rev. Brian Taylor co-officiating. A visitation will take place on Sunday from 1:00 pm until 4:45 pm. As it was so important to Perry to respect and protect others, we ask that anyone in attendance wear a mask and practice social distancing. Adding a little Packer attire would also be a fitting tribute. A livestream of the funeral service will be made available at 5:00 pm on Sunday by visiting www.wenig.live/PerryHoitink .  Memorial contributions can be made in his name to First Reformed Church of Oostburg for Missions. For online condolences and additional information, please visit www.wenigfh.com The Wenig Funeral Home of Oostburg (920-564-2771) is serving the family.

Please click here to view the video tribute
To order memorial trees or send flowers to the family in memory of Perry Hoitink, please visit our flower store.