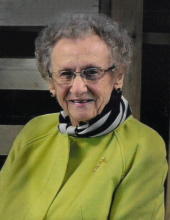 Phyllis Ann Dulmes, 88, of Oostburg, passed away on Monday, November 30, 2020, at her home. Phyllis TenDolle was born on June 9, 1932, to John and Grace (VanderWeele) TenDolle and was a graduate of Oostburg High School. On February 6, 1954, Phyllis married her best friend, James Eugene Dulmes at Gibbsville Reformed Church. James preceded her in death on April 15, 2007. Phyllis was a faithful member of Gibbsville Reformed Church where she enjoyed being active in choir, bible studies, and various ladies' groups. She was a woman of quiet strength and generosity. She was the first to volunteer to make a meal to for a person in need or a baked good for a friend. She enjoyed golfing, reading, traveling, gardening, and bird watching. Above all, Phyllis cherished time with those she loved and will be missed dearly. Phyllis is survived by her daughter, Julie (Kevin) Brill of Oostburg; two sons, Brian (Anita) Dulmes of Deerbrook, WI, Galen (Denise) Dulmes of Oostburg; six grandchildren, Nicole (Nic) Gilbertson, Ashley (Adam) Tykac, Jennifer (Joe) Duncan, Kaitlyn Dulmes, James Dulmes, Benjamin Dulmes; eight great- grandchildren; two brothers, John (Margery) TenDolle, Glenn (Annette) TenDolle; two sisters-in-law, Edith TenDolle, Harriet TenDolle; brother-in-law, Art (Sue) Dulmes; and a special cousin, Warren (Dorothy) Arthur. She is further survived by nieces, nephews, other relatives, and friends. Phyllis was preceded in death by her parents, John Sr. and Grace TenDolle; husband, James Eugene Dulmes; son, Jeffrey Alan Dulmes; two brothers, Carl TenDolle, Lloyd TenDolle. Friends and family may call the Wenig Funeral Home of Oostburg on Friday, December 4, 2020, from 11:00am until 1:00 pm. Face masks and physical distancing are required. A private funeral service with a public livestream will take place on Friday at 1:00 pm. All are welcome to join by visiting www.facebook.com/groups/phyllisdulmes . A private burial will take place at Hingham Cemetery.Being a brave cancer survivor and woman of bold faith, memorial contributions can be made in her name to the American Cancer Society and Campus Life of Sheboygan County. The family would like to extend their gratitude to the staff of Home Instead Senior Care and Aurora Home Health and Hospice for their compassion care they received. For online condolences and additional information please visit www.wenigfh.com. The Wenig Funeral Home of Oostburg (920-564-2771) is serving the Dulmes family with arrangements.

Please click here to view the video tribute
To order memorial trees or send flowers to the family in memory of Phyllis Dulmes, please visit our flower store.