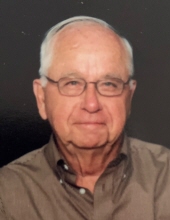 Raymond Richard Van Haveren of Sheboygan, left his earthly life on November 23, 2020. Ray was born on December 21, 1927 to Cornelius and Sarah (nee' Lancer) Van Haveren. He was born and raised in Sheboygan. Ray served in the United States Army during World War II. Upon his return, he became engaged to Jane Testroete, of Sheboygan. They married on July 20, 1949 at First Christian Reformed Church in Sheboygan, where they were dedicated members of the congregation for many decades. Upon moving to Oostburg in their retirement, they joined First Oostburg Christian Reformed Church.After a 40-year career at Kohler Company, Ray retired in 1989. He and Jane enjoyed 27 winters in Marco Island, Florida, where he loved playing shuffleboard and walking on the beach. Both enjoyed many new friendships while in Florida. They were active members in their new winter church, Marco Presbyterian Church.Ray was preceded in death by his wife Jane, who passed away in February of 2018. He will be dearly missed by his family: daughter Bonnie Rickerby and son-in-law Robert Rickerby of Seneca, South Carolina; daughter Carol Van Haveren of Sheboygan; daughter Julie DeVos of Fort Wayne, Indiana; daughter Jacqueline Garbinsky and son-in-law Ron Garbinsky of Columbia, South Carolina. He will also be missed by grandsons Nicolas Gliszinski, Benjamin (Michelle) Gliszinski, Christopher (Ashley) Rickerby, Matt Rickerby, and Jesse Collins, as well as his great- grandchildren, Abilene and Sonny Gliszinski. He was preceded in death by his parents, sister Jane (John) Stephen, and brothers Eugene, James, and David. He will be missed by brothers Richard (Sharon) Van Haveren, Wes Van Haveren and the families of his siblings.The family thanks the staff at Terrace Estates, Sheboygan Senior Community, Sharon Richardson Hospice and Wenig Funeral Home for their compassionate care. Ray's family will plan a celebration of his life at a future date. Memorials may be made to Sharon Richardson Hospice. For online condolences and additional information please visit www.wenigfh.com. The Wenig Funeral Home of Oostburg (920-564-2771) is serving the Van Haveren family with arrangements.

To order memorial trees or send flowers to the family in memory of Raymond Van Haveren, please visit our flower store.