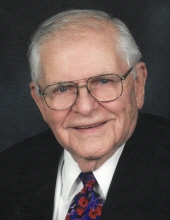 Rev. Paul John Van Loon, 95, of Oostburg, passed away on Sunday, March 10, 2019, at Harbor Chase in Shorewood. Paul was born on April 9, 1923, in La Crosse to John and Anna (Mulder) Van Loon. Paul was a 1941 graduate of Holmen High School, he received his Bachelors Degree in History from Bob Jones University in Greenville, SC and his Bachelors in Divinity from Dubuque University Seminary. He served his country in the United States Army during WWII from 1942-1946. On July 26, 1947 he married Mary Jane Leavesley in Ann Arbor, MI. Paul was pastor at Ottawa Presbyterian Church in Dousman for 6 years and then First Presbyterian Church in Oostburg for 25 years until his retirement in 1991.Paul was a member of Milwaukee Presbytery and was Moderator in 1976. He was a part time visiting pastor at Hingham Reformed Church, and an interim pastor in Cedar Grove and Stoney Hills. Paul was a charter member of the Oostburg Kiwanis; he was also an active member of the American Legion Post 286, and VFW. He served as chaplain for both the American Legion Post 286 and VFW, as well as being the State of Wisconsin VFW Chaplain in the late 90's. Paul and Mary Jane's involvement with the New Wilmington Missionary Conference in PA, led to a friendship with missionaries Stan and Betty Wick, which resulted in members of the church building a school at their mission in Guatemala.  In 2011, Paul had the privilege to go on the Stars and Stripes Honor Flight. He was an avid Green Bay Packers and Milwaukee Brewers fan; he enjoyed Bible study, reading, history, travel, photography, creating slide programs, and gardening.  Paul is survived by his wife, Mary Jane; three daughters, Mary Jane (Behrouz Vafa) Van Loon of Bridgewater, NJ, Ruth Anne (David Nash) Van Loon of Cincinnati, OH, and Sara Van Loon of Milwaukee; three grandchildren, Nathan Nash, Samuel Nash, and Marjan Vafa; brother, Donald (Becky) Van Loon; two sisters-in-law, Eleanor Poole and Evelyn Van Loon; and one brother-in-law, Forrest Williams. He is further survived by nieces, nephews, other relatives and friends. Paul was preceded in death by his parents; two sisters, Doris (Carl) Engel and Rachel Williams; brother, Russell Van Loon; mother-in-law, Ethel Leavesley; sister-in-law, Donna Van Loon; and brother-in-law, Duane Poole. A funeral service to celebrate Paul's life will be held on Saturday, March 16, 2019, at 11 am at First Presbyterian Church in Oostburg with Rev. Brian Jacobson officiating. A burial will take place at Oostburg Cemetery. Relatives and friends may greet the family at Wenig Funeral Home in Oostburg on Friday, March 15, 2019, from 3-7 pm and again on Saturday, March 16, 2019 at the CHURCH from 9 am until the time of service at 11 am. A memorial fund is being established in his name. For online condolences and additional information please visit www.wenigfh.com. The Wenig Funeral Home of Oostburg (920-564-2771) is serving the Van Loon family with arrangements.

To order memorial trees or send flowers to the family in memory of Rev. Loon, please visit our flower store.